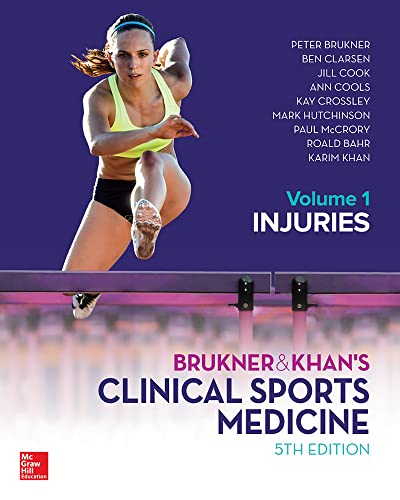 THE #1 TEXT IN CLINICAL SPORTS MEDICINE....ESSENTIAL FOR PT STUDENTS, ATHLETIC TRAINERS, AND MEDICINE PHYSICIANS
The cornerstone text on sports and exercise medicine
A Doody's Core Title for 2017!
Brukner & Khan's Clinical Sports Medicine is the world-leading title in sports and exercise medicine, providing an authoritative foundation for clinicians and students. This complete practical guide to physiotherapy and musculoskeletal medicine covers all aspects of diagnosis and contemporary management of sports-related injuries. This fifth edition has been expanded to accommodate a much higher level of evidence-based content. It reflects the huge amount of new research and significant changes in thinking since the fourth edition was published.
For this volume, Injuries, all chapters have been comprehensively updated by sports physiotherapists and sports physicians at the top of their fields from around the world.  There are more than 300 new figures and tables, as well as six new chapters including
· Training programming and prescription· Return to play· Pain: the clinical aspects
Ask your School library to subscribe to: http://csm.mhmedical.com/

Peter Brukner OAM, MBBS, FACSP, FACSM, FFSEMPeter Brukner is a Sport and Exercise Physician and currently the Australian cricket team doctor. He was previously Head of Sports Medicine and Sports Science at the Liverpool Football Club in the UK. Peter is the founding partner of the Olympic Park Sports Medicine Centre, a past president of the Australasian College of Sports Physicians, and Professor of Sports Medicine at La Trobe University. Peter has been an Olympic team physician and was the Socceroos team doctor at the 2010 World Cup. In 2005 Peter was awarded the Order of Australia medal (OAM) for services to sports medicine.Karim Khan MD, PhD, MBA, FACSP, FACSM, FFSEMKarim Khan is a Sport and Exercise Physician and Professor of Sports Medicine at the Department of Family Practice at the University of British Columbia, Vancouver, Canada.  He is Editor in Chief of the British Journal of Sports Medicine (BJSM) and has published more than 280 peer-reviewed research articles. In 2001, he was awarded the Australian Prime Minister’s Medal for service to sports medicine. He was profiled in The Lancet in its special 2012 Olympic edition.