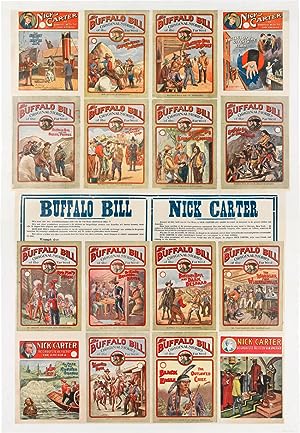 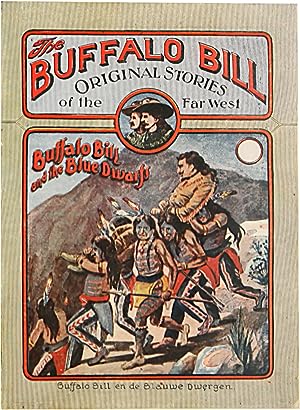 We're sorry; this specific copy is no longer available. Here are our closest matches for BUFFALO BILL - NICK CARTER.

Chromolithographic poster, three sheets joined together, 49 1/2 x 33 1/2 inches in total. A bit of slight wrinkling. Near fine. Linen- backed. A stunning poster advertising the Dutch publication of a Buffalo Bill serial magazine, showing the front cover of twelve issues packed with Western excitement. The serial is entitled THE BUFFALO BILL ORIGINAL STORIES OF THE FAR WEST, and was printed in six colors and published every two weeks. This poster actually advertises another serial magazine, featuring the adventures of detective Nick Carter, and four of those issues are featured in the corners of this poster. But the star of the show is Buffalo Bill, with the Dutch caption text asking, rhetorically, "Wie kent niet den wereldberoemden held van de Far-West Buffalo Bill" ("who does not know the world famous hero of the Far West Buffalo Bill")? A dozen Buffalo Bill covers are featured, with the titles given in English and in Dutch. Titles include "Buffalo Bill and Dark Despard"; "The Warbler from Whistleville"; "Buffalo Bill and the Blue Dwarfs"; and "Black Eagle, The Outlawed Chief," among others. The text announces that the magazine would introduce the reader to the mysterious customs of Indian tribes, and bring not only pleasure, but information. As opposed to Buffalo Bill, the Nick Carter stories are set in major East Coast and Midwestern cities, but introduce some exoticism by featuring stories involving the Chinese, or strange religious sects. By the turn of the century Buffalo Bill had already mounted several tours of England and the Continent, and this striking poster is ample evidence of his great popularity overseas, and the European thirst for adventure stories set in the American West. Seller Inventory # WRCAM55638