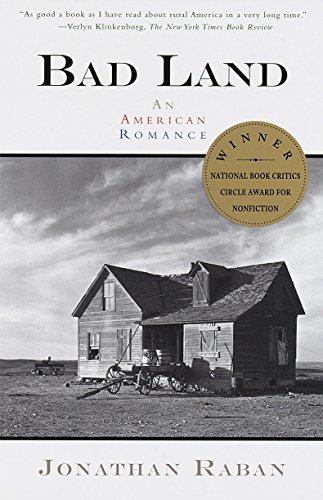 Synopsis: A New York Times Editors' Choice for Book of the Year
Winner of the Pacific Northwest Booksellers Award
Winner of the PEN West Creative Nonfiction Award
"No one has evoked with greater power the marriage of land and sky that gives this country both its beauty and its terror. "
--Washington Post Book World

In 1909 maps still identified eastern Montana as the Great American Desert.  But in that year Congress, lobbied heavily by railroad companies, offered 320-acre tracts of land to anyone bold or foolish enough to stake a claim to them. Drawn by shamelessly inventive brochures, countless homesteaders--many of them immigrants--went west to make their fortunes. Most failed. In Bad Land, Jonathan Raban travels through the unforgiving country that was the scene of their dreams and undoing, and makes their story come miraculously alive.

In towns named Terry, Calypso, and Ismay (which changed its name to Joe, Montana, in an effort to attract football fans), and in the landscape in between, Raban unearths a vanished episode of American history, with its own ruins, its own heroes and heroines, its own hopeful myths and bitter memories. Startlingly observed, beautifully written, this book is a contemporary classic of the American West.

Review: Jonathan Raban ambles and picks his way across the Montana prairie, called "The Great American Desert" until Congress offered 320-acre tracts of barren land to immigrants with stardust in their eyes. Raban's prose makes love to the waves of land, red dirt roads, and skeletons of homesteads that couldn't survive the Dirty Thirties. As poignant as any romance novel, there's heartbreak in the failed dreams of the homesteaders, a pang of destiny in the arbitrary way railroad towns were thrown into existence, and inspiration in the heroism of people who've fashioned lives for themselves by cobbling together homes from the ruined houses of those who couldn't make it. Through it all, Raban's voice examines and honors the vast open expanses of land and pays homage to the histories of families who eked out an existence.

Book Description Vintage. Paperback. Condition: GOOD. Spine creases, wear to binding and pages from reading. May contain limited notes, underlining or highlighting that does affect the text. Possible ex library copy, thatâ ll have the markings and stickers associated from the library. Accessories such as CD, codes, toys, may not be included. Seller Inventory # 3142157102

Book Description Vintage. Paperback. Condition: GOOD. Spine creases, wear to binding and pages from reading. May contain limited notes, underlining or highlighting that does affect the text. Possible ex library copy, thatâ ll have the markings and stickers associated from the library. Accessories such as CD, codes, toys, may not be included. Seller Inventory # 3168594087

Book Description Paperback. Condition: Good. The book has been read but remains in clean condition. All pages are intact and the cover is intact. Some minor wear to the spine. Seller Inventory # GOR002557457

Book Description -. Paperback. Condition: Very Good. Bad Land: An American Romance (Vintage Departures) This book is in very good condition and will be shipped within 24 hours of ordering. The cover may have some limited signs of wear but the pages are clean, intact and the spine remains undamaged. This book has clearly been well maintained and looked after thus far. Money back guarantee if you are not satisfied. See all our books here, order more than 1 book and get discounted shipping. Seller Inventory # 7719-9780679759065

Book Description Vintage 01/10/1997, 1997. Paperback. Condition: Very Good. Shipped within 24 hours from our UK warehouse. Clean, undamaged book with no damage to pages and minimal wear to the cover. Spine still tight, in very good condition. Remember if you are not happy, you are covered by our 100% money back guarantee. Seller Inventory # 6545-9780679759065

Book Description Vintage Books USA, 1997. Paperback. Condition: Used; Good. **Simply Brit** Shipped with Premium postal service within 24 hours from the UK with impressive delivery time. We have dispatched from our book depository; items of good condition to over ten million satisfied customers worldwide. We are committed to providing you with reliable and efficient service at all times. Seller Inventory # 2757968

There are 70 more copies of this book