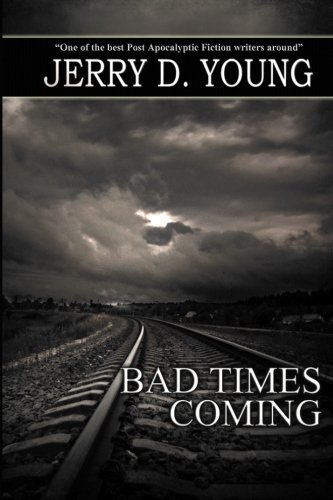 Synopsis: ROGER KNEW WHAT IT WAS LIKE TO SCRAPE BY. Things had been lean for quite a while and he had been forced to sell off a lot of his family’s things to make ends meet. He even came close to having to sell the land that had been in his family for three generations but fortunately was able to avoid that. Now finally with steady work coming in, he was getting back on his feet and slowly but surely rebuilding his family’s finances. He felt that by living simply and working hard they could position themselves to live a self-sufficient life on the old property and for once, it seemed that his timing couldn’t have been better. There were bad times coming and he would need every bit of time he could get to prepare for what was ahead. ABOUT THE AUTHOR Jerry D Young was born at home, in Senath, Missouri July 3, 1953. At age 5 the family rented a small farm house on an active farm 40 miles southwest of St. Louis. While the family weren't farmers, they lived something of a homestead type life, raising a milk cow, sometimes two, and calves, a pig or two, chickens, and the occasional goat. Along with the stock, a large garden helped to feed Jerry's three brothers and two sisters for several years. Fishing and hunting contributed to the pantry, as did foraging the wild edibles on the property. At the age of 14, the family, minus a brother and two sisters that were now adults and on their own, moved back to Senath. Having been encouraged from an early age to read, Jerry was a regular patron of the Senath Branch Library. A love of a good story was born within him, and shortly before graduating high school, for a lack of stories that he liked at the library, he began to write short vignettes, and started taking notes for stories that he wanted to tell. Well, a full life interceded, and the writing didn't resume for several years. But while working a job with a much free time, and the then newfangled home computer, Jerry began to write in earnest. With the occasional gap in the process, Jerry continued to research and write, never believing he could ever be published. But when he turned 50, he wanted a change in his life, left the job he was doing and began focusing on his writing. When he became ill, the writing stopped, but not the inspiration. When he started writing again, in 2004, after getting the medical problems under control, he began to read some on-line stories dealing with emergency preparedness, one of his other loves. The die was cast. Now with over a hundred of the vignettes and short stories about how to survive disasters written, along with his other novels, Jerry decided to go for broke, adding one of his previous works every few days to his list of stories now available, Jerry continues to write, both the Prep/PAW stories, as well as action adventure with a little romance type stories that first got him started.