Items related to Balancing Acts Technology, Finance and the American... 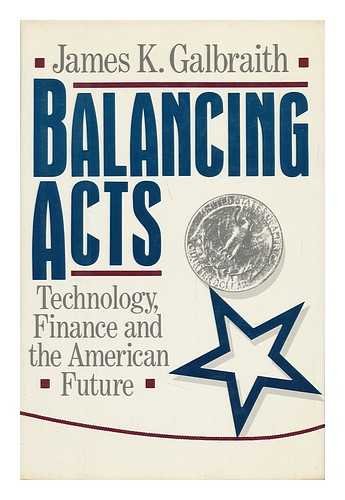 Quantity: 1
View all  copies of this book
Buy Used
Price: US$ 20.00 Convert Currency
Shipping: US$ 5.95 Within U.S.A. Destination, rates & speeds
Add to basket

Synopsis:
The growing challenge of foreign competition requires some major structural shifts in the US economy. The author, former executive director of the Joint Economic Committee of Congress, defines the problem, and suggests a politically viable way out of the dilemma. Annotation copyright Book News, Inc. Portland, Or.
From Publishers Weekly:
Galbraith, former executive director of the Congressional Joint Economic Committee and now associate professor at the University of Texas, seeks here to address "the present paralysis of progressive economic opinion." The key to his analysis is the role played by the highly profitable and technically advanced capital goods and machine tools sector of the U.S. economy. He argues that American prosperity can be assured only if we maintain our technological leadership. To do this, the author (son of John Kenneth Galbraith) proposes to repair our national infrastructure, a tax hike to reduce the federal budget deficit, further depreciation of the dollar, and debt relief to Third World countries so that they can purchase American exports. He opposes certain kinds of government economic intervention, such as wage/price controls and subsidies to specific industries. His analysis loses some of its force in the face of the recent strong resurgence of the capital goods sector and the highest level of infrastructure spending in 13 years. In the course of trying to revive "progressive economic opinion" by justifying some government economic intervention, Galbraith offers a few novel insights, but ultimately his analysis is not persuasive.
Copyright 1989 Reed Business Information, Inc.

25,000+ items on line. In business since 1987. Core focus: better academic titles in all fields--scarce and rare. Several specialized collections-- Argentine history, European linguistics, Spanish literature and humanities, and others. We have many collectable titles as well. We are open by appointment and easy to browse by subject on ABE. Orders are sent out within a day, always packed in hard cardboard.


Orders usually ship on the following business day. Shipping costs are based on books weighing 2.2 LB, or 1 KG. If your book order is heavy or oversized, we may contact you to let you know extra shipping is required.