Home Kopp, James B. The Bassoon 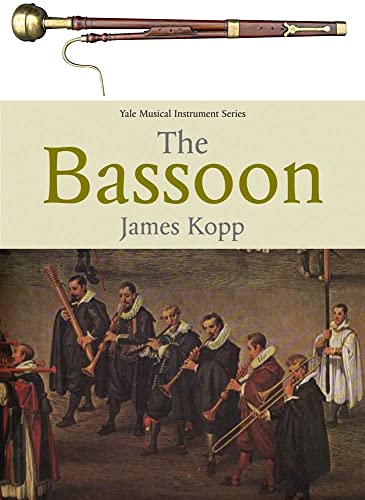 An authoritative account of the 500-year history of the bassoon, with new research findings and dozens of rare illustrations

This welcome volume encompasses the entire history of the bassoon, from its origins five centuries ago to its place in twenty-first-century music. James Kopp draws on new archival research and many years’ experience playing the instrument to provide an up-to-date and lively portrait of today’s bassoon and its intriguing predecessors. He discusses the bassoon’s makers, its players, its repertory, its myths, and its audiences, all in unprecedented detail.

The bassoon was invented in Italy in response to the need for a bass-register double-reed woodwind suitable for processionals and marching. Composers were quick to exploit its agility and unique timbre. Later, during the reign of Louis XIV, the instrument underwent a major redesign, giving voice to its tenor register. In the early 1800s new scientific precepts propelled a wave of invention and design modifications. In the twentieth century, the multiplicity of competing bassoon designs narrowed to a German (or Heckel) type and a French type, the latter now nearly extinct. The author examines the acoustical consequences of these various redesigns. He also offers new coverage of the bassoon’s social history, including its roles in the military and church and its global use during the European Colonial period. Separate historical chapters devoted to contrabassoons and smaller bassoons complete the volume.

James B. Kopp has performed professionally as a bassoonist, contrabassoonist, and early bassoonist for more than twenty years. He has an international reputation as a clinician and maker of reeds for bassoon, contrabassoon, and early bassoon. His articles on the history and acoustics of woodwind instruments have appeared in many journals and reference books, and he is a senior editor of the forthcoming Grove Dictionary of Musical Instruments, second edition.

Book Description Yale University Press, 2012. Condition: Good. 1st. Former Library book. Shows some signs of wear, and may have some markings on the inside. Seller Inventory # GRP114457046

Book Description Yale University Press, 2012. Condition: Good. A+ Customer service! Satisfaction Guaranteed! Book is in Used-Good condition. Pages and cover are clean and intact. Used items may not include supplementary materials such as CDs or access codes. May show signs of minor shelf wear and contain limited notes and highlighting. Seller Inventory # 0300118295-2-4