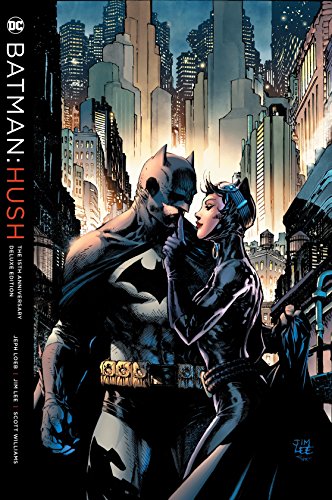 Gotham City is infected by a crime epidemic and all of Batman’s enemies have emerged to throw his life into utter chaos. But little do they know that they’re all pawns of the villainous Hush in an elaborate game of revenge against Bruce Wayne. Pushed past his breaking point, Batman will need to use more than the world’s greatest detective skills to uncover the true identity of this mysterious mastermind before it’s too late.

About the Author: Jeph Loeb is the author of BATMAN: THE LONG HALLOWEEN, BATMAN: DARK VICTORY, SUPERMAN FOR ALL SEASONS, CATWOMAN: WHEN IN ROME, CHALLENGERS OF THE UNKNOWN MUST DIE!, SPIDER-MAN: BLUE, DAREDEVIL: YELLOW AND HULK: GRAY--all of which were collaborations with artist Tim Sale.  He has also written SUPERMAN/BATMAN, SUPERGIRL, THE WITCHING HOUR, CABLE, X-MAN, X-FORCE, THE ULTIMATES 3 and various other books.  His TV and movie credits include TEEN WOLF, HEROES, COMMANDO, BUFFY: THE ANIMATED SERIES and SMALLVILLE. Currently, he is EVP and Head of Television Development for Marvel Comics.

Book Description DC Comics, 2017. Hardcover. Condition: Good. Connecting readers with great books since 1972. Used books may not include companion materials, some shelf wear, may contain highlighting/notes, may not include cdrom or access codes. Customer service is our top priority!. Seller Inventory # S_267524900

Book Description Paperback. Condition: Very Good. The book has been read, but is in excellent condition. Pages are intact and not marred by notes or highlighting. The spine remains undamaged. Seller Inventory # GOR010332645

Shipping: US$ 10.95
From United Kingdom to U.S.A.
Destination, rates & speeds