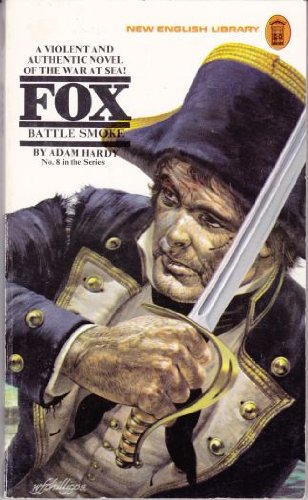 ONLY THE RUTHLESS SURVIVE

Years on the high seas had taught George Abercrombie Fox that running a ship and winning battles with it were only for the brave and the brash ... for the men who would die rather than surrender to the sea or the enemy.

Now, with the Furieuse barely afloat, with the captain barely in command of his crew, with the French preparing another attack, only Fox can maneuver them back home. The big question is: at what price?

Fox is a genius at whipping ships and men back into shape. But few can tolerate his tough and demanding standards of excellence. Once again, he must defy men of power and influence for the honor of his ship and his men. Even if it means fighting an entire squadron. Which bigod, he is prepared to do!

FOX IS NOT THE NOBLE HERO OF TRADITIONAL FICTION. FOX IS A FIGHTING MAN WHO TRANSCENDS HEROISM — HE DOESN’T CARE HOW HE WINS AS LONG AS HE WINS. HE’S MEAN, CUNNING AND MOST VICIOUS WHEN TRAPPED. THERE’S NO WAY TO OUTFOX FOX!

About the Author: Adam Hardy was a pen name used by Kenneth Bulmer (1921-2005). A prolific writer, Bulmer wrote over 160 novels and many short stories, both under his real name and various pen names. He is best known for science fiction, including his long-running Dray Prescot series of planetary romances, but he wrote in many genres.

Book Description Paperback. Condition: Good. The book has been read but remains in clean condition. All pages are intact and the cover is intact. Some minor wear to the spine. Seller Inventory # GOR001622832

Book Description Paperback. Condition: Fair. A readable copy of the book which may include some defects such as highlighting and notes. Cover and pages may be creased and show discolouration. Seller Inventory # GOR000948677

Book Description Paperback. Condition: Very Good. The book has been read, but is in excellent condition. Pages are intact and not marred by notes or highlighting. The spine remains undamaged. Seller Inventory # GOR001717523

Book Description New English Library Ltd, 1974. Paperback. Condition: Good. All orders are dispatched the following working day from our UK warehouse. Established in 2004, we have over 500,000 books in stock. No quibble refund if not completely satisfied. Seller Inventory # mon0003797439