Items related to Beer in the Middle Ages and the Renaissance 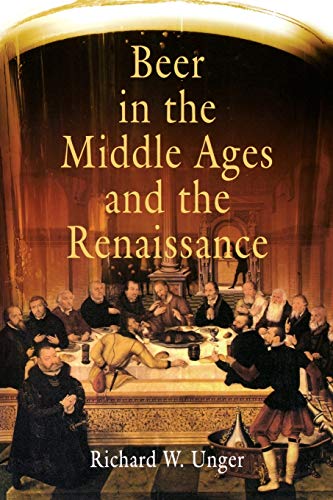 Beer in the Middle Ages and the Renaissance

Looking at a time when beer was often a nutritional necessity, was sometimes used as medicine, could be flavored with everything from the bark of fir trees to thyme and fresh eggs, and was consumed by men, women, and children alike, this book presents a detailed history of the business, art, and governance of brewing. Num Pages: 344 pages, 23 illus. BIC Classification: HBT. Category: (U) Tertiary Education (US: College). Dimension: 236 x 167 x 24. Weight in Grams: 474. . 2007. Paperback. . . . . Books ship from the US and Ireland. Bookseller Inventory # V9780812219999

Title: Beer in the Middle Ages and the Renaissance

The beer of today—brewed from malted grain and hops, manufactured by large and often multinational corporations, frequently associated with young adults, sports, and drunkenness—is largely the result of scientific and industrial developments of the nineteenth century. Modern beer, however, has little in common with the drink that carried that name through the Middle Ages and Renaissance. Looking at a time when beer was often a nutritional necessity, was sometimes used as medicine, could be flavored with everything from the bark of fir trees to thyme and fresh eggs, and was consumed by men, women, and children alike, Beer in the Middle Ages and the Renaissance presents an extraordinarily detailed history of the business, art, and governance of brewing.

During the medieval and early modern periods beer was as much a daily necessity as a source of inebriation and amusement. It was the beverage of choice of urban populations that lacked access to secure sources of potable water; a commodity of economic as well as social importance; a safe drink for daily consumption that was less expensive than wine; and a major source of tax revenue for the state. In Beer in the Middle Ages and the Renaissance, Richard W. Unger has written an encompassing study of beer as both a product and an economic force in Europe.

Drawing from archives in the Low Countries and England to assemble an impressively complete history, Unger describes the transformation of the industry from small-scale production that was a basic part of housewifery to a highly regulated commercial enterprise dominated by the wealthy and overseen by government authorities. Looking at the intersecting technological, economic, cultural, and political changes that influenced the transformation of brewing over centuries, he traces how improvements in technology and in the distribution of information combined to standardize quality, showing how the process of urbanization created the concentrated markets essential for commercial production.

Weaving together the stories of prosperous businessmen, skilled brewmasters, and small producers, this impressively researched overview of the social and cultural practices that surrounded the beer industry is rich in implication for the history of the period as a whole.

Richard W. Unger is Professor of History at the University of British Columbia. He is also author of A History of Brewing in Holland, 900-1900: Economy, Technology, and the State, The Art of Medieval Technology: Images of Noah the Shipbuilder, and The Ship in the Medieval Economy, 600-1600.