Items related to Beneath the Rim: A Photographic Journey Through the...

Home Lockwood, C. C. Beneath the Rim: A Photographic Journey Through the Grand Canyon
Stock Image 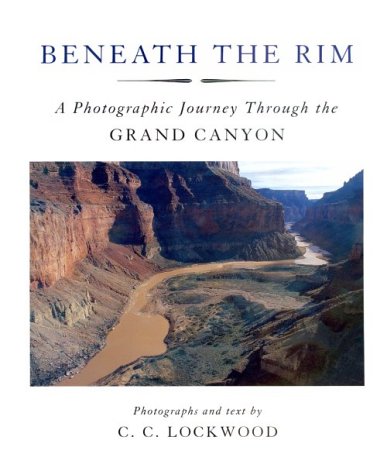 Beneath the Rim: A Photographic Journey Through the Grand Canyon

Title: Beneath the Rim: A Photographic Journey ...

In 1989, when award-winning nature photographer C. C. Lockwood headed west on a shoot, a friend in Kanab, Utah, insisted that he photograph a Grand Canyon sunset from the Colorado River. Thus, this ardent adventurer made his first trip down that waterway, from Lee's Ferry to Pearce Ferry, and discovered the splendor of the Grand Canyon from the perspective of a boatman.
His curiosity piqued, Lockwood began teaching photography workshops for a Colorado River expedition company, eventually making more than a dozen trips down the rushing, rapids-laced stream. He was fascinated with his surroundings: the subtle differences between Soap Creek Rapid, Serpentine Rapid, and Crystal Rapid became apparent, as did the fine line that differentiates Muav Limestone from Redwall Limestone. Gradually, every bend in the river was imparted with meaning.
As Lockwood amassed breathtaking photographs, he discovered that, remarkably, there was little photographic documentation of the Grand Canyon from river level. In Beneath the Rim, he offers the visual thrill of that scenery and weaves the exploits of professional boaters and the experiences of early Grand Canyon photographers with his own escapades to depict the marvel of the Grand Canyon from the river.