Home Mbeke-Ekanem, Tom Beyond the Execution 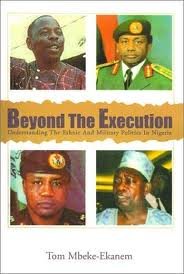 Synopsis: America's major oil supplier and Africa's most populous country, Nigeria, can only be understood in terms of its 250 separate ehtnic groups. The complexities of Nigeria are explained in the circumtances surrounding the death of Ken Saro-Wiwa, Nigeria's foremost environmentalist from an oil producing region, and General Abacha, the President who had him and his cabinet members killed and then schemed to retain power as a civilian.

Beyond the Execution is not just about the execution of Ken Saro-Wiwa, the book also looks into the ethnic politics that pervades Nigeria going back to the 1950s prior to gaining independence from Britain in 1960, the turmoil that led to the first military coup d'etat of January 1966, and the massacre of Ibo ethnic group that triggered the Biafran civil war.

The battle for ethnic dominance took a center stage with the seizure of the petroleum resources that belonged to the minority and the subsequent annulment of presidential election result in June 1993. Ken Saro-Wiwa, a fearless minority activist, had in 1990 emerged from the oil producing region of Ogoni and demanded economic justice for his people. When his pleas were ignored, he took his message to the United Nations and drew worldwide attention to the world's most polluted environment. Saro-Wiwa and eight activists were arrested and falsely charged with murder and consequently executed by General Abacha's military tribunal. This book gives in detail the minute by minute tribunal trial, conviction, and the gruesome judicial murder that was heard around the world.

To maintain ethnic hegemony, General Abacha devised schemes to succeed himself as a civilian president. His political opponents were either in prison, dead, or in exile. Two months to his scheduled election, Abacha suddenly died in the midst of international prostitutes. A month later, Abiola, the presidential candidate he jailed also died, suddenly, in jail. This and autopsy report are detailed in a chapter titled "When the Mandate Dies". Essentially, this book covers years of military syndrome and the aftermath.

About the Author: Tom Mbeke-Ekanem was born in Ituk Mbang in Akwa Ibom State of Nigeria in 1957. He attended Government Secondary School at Afaha Eket between 1971 and 1975. In 1978 he left Nigeria for United States where he earned a Bachelor of Science degree in Petroleum Engineering from the University of Oklahoma in 1984. He returned to Nigeria and enlisted in National Youth Service Corps in 1987. In 1989 he was back in United States where in 1991 he earned Master of Science degree in Industrial Engineering from the University of Oklahoma. Presently, he is working as a regulatory Engineer for California Environmental Protection Agency (Cal/EPA). In 1995 he founded an organization named COPPSON (Coalition of Petroleum Producing States of Nigeria) whose primary objective was to draw attention to the environmental pollution in the oil producing region of Nigeria.

Book Description Inland Publication Company, 2000. Condition: Good. Shows some signs of wear, and may have some markings on the inside. Seller Inventory # GRP116324851

Book Description Inland Publication Company. Paperback. Condition: Very Good. A copy that has been read, but remains in excellent condition. Pages are intact and are not marred by notes or highlighting, but may contain a neat previous owner name. The spine remains undamaged. At ThriftBooks, our motto is: Read More, Spend Less. Seller Inventory # G0970489218I4N00