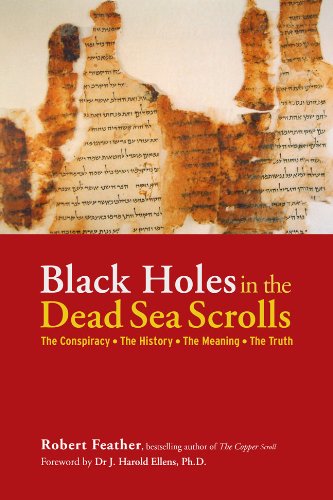 Synopsis: Ever since the Dead Sea Scrolls were unearthed in 1947, a small group of scholars has exerted a jealous control over access to the originals. This policy has hindered understanding of these priceless texts. Now expert Robert Feather exposes a shocking conspiracy at the heart of biblical and archaeological studies, and shines a bold--and sure to be controversial--light on the Scrolls, linking the isolated Essene cult at Qumran with Jesus Christ and the Ancient Egyptian pharaoh Akhenaten, founder of monotheism.

About the Author: Robert Feather's books include The Mystery of the Copper Scroll of Qumran (2003), The Copper Scroll Decoded (1999), and The Secret Initiation of Jesus at Qumran (Watkins 2006). He has appeared on the Discovery and National Geographic TV channels. A BBC documentary based on his work, The Pharaoh's Holy Treasure, was first screened in 2002, and he participated in a BBC/Discovery program, The Spear of Jesus, in 2003. A sequel, co-presented by Feather, has been screened by National Geographic.

Book Description Watkins Publishing LTD, 2012. Hardcover. Condition: Good. Ex library copy with usual stamps/stickers Good condition is defined as: a copy that has been read but remains in clean condition. All of the pages are intact and the cover is intact and the spine may show signs of wear. The book may have minor markings which are not specifically mentioned. Most items will be dispatched the same or the next working day. Seller Inventory # mon0011931148

Book Description Watkins Publishing LTD, 2012. Hardcover. Condition: Used; Good. **SHIPPED FROM UK** We believe you will be completely satisfied with our quick and reliable service. All orders are dispatched as swiftly as possible! Buy with confidence!. Seller Inventory # 1857299

Book Description Watkins, 2012. Condition: Good. 1st. Ships from the UK. Shows some signs of wear, and may have some markings on the inside. Seller Inventory # GRP116757204

Book Description Watkins, 2012. Condition: Good. 1st. Ships from the UK. Former Library book. Shows some signs of wear, and may have some markings on the inside. Seller Inventory # GRP93658018

Book Description Watkins Media Limited. Hardcover. Condition: Good. A copy that has been read, but remains in clean condition. All pages are intact, and the cover is intact. The spine may show signs of wear. Pages can include limited notes and highlighting, and the copy can include previous owner inscriptions. At ThriftBooks, our motto is: Read More, Spend Less. Seller Inventory # G1780283776I3N00

Book Description Watkins, 2012. Hardcover. Condition: Good. Connecting readers with great books since 1972. Used books may not include companion materials, some shelf wear, may contain highlighting/notes, may not include cdrom or access codes. Customer service is our top priority!. Seller Inventory # S_270504115

Book Description Condition: VeryGood. Cover has some rubbing and edge wear. Access codes, CDs, and other accessories may not be included. All items ship Mon-Fri. Seller Inventory # 2Y6ISV001M1O