Items related to The Blind Watchmaker: Why the Evidence of Evolution...

Home Dawkins, Richard The Blind Watchmaker: Why the Evidence of Evolution Reveals a ...
Stock Image 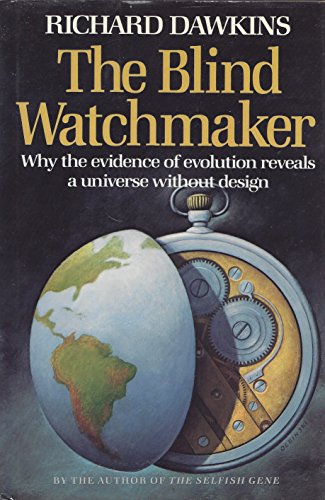 The Blind Watchmaker: Why the Evidence of Evolution Reveals a Universe Without Design [SIGNED COPY, FIRST PRINTING]

Quantity: 1
View all  copies of this book
Buy Used
Price: US$ 225.00 Convert Currency
Shipping: US$ 3.99 Within U.S.A. Destination, rates & speeds
Add to basket

Near fine in near fine dust jacket. SIGNED by author on title page (signature only). 1st edition, 1st printing, complete number line. Dust jacket is rubbed, has mild scratching, slight edgewear, and a small closed tear. Book has faint shelfwear. Sewn binding. Cloth over boards. 332 p. Audience: General/trade. Dawkins is a well known evolutionary biologist and atheist, founder of the Richard Dawkins Foundation for Reason and Science to promote the teaching of evolution and to counteract those who advocate classroom programs against evolution, a Fellow of the Royal Society, and Fellow of the Royal Society of Literature. He is the winner of the Los Angeles Times Literary Prize, Zoological Society of London's Silver Medal, Finlay Innovation Award, Michael Faraday Award, Nakayama Prize, Humanist of the Year Award, International Cosmos Prize, Kistler Prize, Medal of the Presidency of the Italian Republic, Emperor Has No Clothes Award, Bicentennial Kelvin Medal, Nierenberg Prize, Shakespeare Prize, Lewis Thomas Prize, and Deschner Award. He is the author of 'The Selfish Gene', 'Brief Candle in the Dark', and 'The God Delusion'. Rare signed. Where possible, all books come with dust jacket in a clear protective plastic sleeve, sealed in a ziplock bag, wrapped in bubble wrap, shipped in a box. Seller Inventory # Alibris.0007790

Title: The Blind Watchmaker: Why the Evidence of ...

Richard Dawkins is not a shy man. Edward Larson's research shows that most scientists today are not formally religious, but Dawkins is an in-your-face atheist in the witty British style:

I want to persuade the reader, not just that the Darwinian world-view happens to be true, but that it is the only known theory that could, in principle, solve the mystery of our existence.

The title of this 1986 work, Dawkins's second book, refers to the Rev. William Paley's 1802 work, Natural Theology, which argued that just as finding a watch would lead you to conclude that a watchmaker must exist, the complexity of living organisms proves that a Creator exists. Not so, says Dawkins: "All appearances to the contrary, the only watchmaker in nature is the blind forces of physics, albeit deployed in a very special way... it is the blind watchmaker."

Dawkins is a hard-core scientist: he doesn't just tell you what is so, he shows you how to find out for yourself. For this book, he wrote Biomorph, one of the first artificial life programs. You can check Dawkins's results on your own Mac or PC.

Most of our books are autographed. Many started out as part of our personal collections that we ran out of space for or acquired duplicates of. We love books and treat them with respect, and always describe them as accurately as we are able. Where possible, all books come with dust jacket in a clear protective plastic sleeve, sealed in a ziplock bag, wrapped in bubble wrap, shipped in a box.

RETURNS are cheerfully accepted when initiated within 30 days. of the estimated delivery date. We ship out within 1-2 business days and U.S. Standard Shipments usually arrive within 6-9 business days, Priority 3-6. We want you to be satisfied with the book you order. We strive to describe each book accurately and individu...