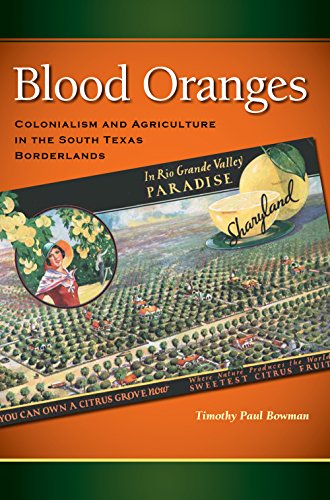 Synopsis: Blood Oranges traces the origins and legacy of racial differences between Anglo Americans and ethnic Mexicans (Mexican nationals and Mexican Americans) in the South Texas borderlands in the twentieth century. Author Tim Bowman uncovers a complex web of historical circumstances that caused ethnic Mexicans in the region to rank among the poorest, least educated, and unhealthiest demographic in the country. The key to this development, Bowman finds, was a “modern colonization movement,” a process that had its roots in the Mexican-American war of the nineteenth century but reached its culmination in the twentieth century. South Texas, in Bowman’s words, became an “internal economy just inside of the US-Mexico border.”

Beginning in the twentieth century, Anglo Americans consciously transformed the region from that of a culturally “Mexican” space, with an economy based on cattle, into one dominated by commercial agriculture focused on citrus and winter vegetables. As Anglos gained political and economic control in the region, they also consolidated their power along racial lines with laws and customs not unlike the “Jim Crow” system of southern segregation. Bowman argues that the Mexican labor class was thus transformed into a marginalized racial caste, the legacy of which remained in place even as large-scale agribusiness cemented its hold on the regional economy later in the century.

Blood Oranges stands to be a major contribution to the history of South Texas and borderland studies alike.

About the Author: TIMOTHY PAUL BOWMAN is an assistant professor of history at West Texas A&M University. He resides in Amarillo, Texas.

1. Blood Oranges - Colonialism and Agriculture in the South Texas Borderlands

5. Blood Oranges: Colonialism and Agriculture in the South Texas Borderlands