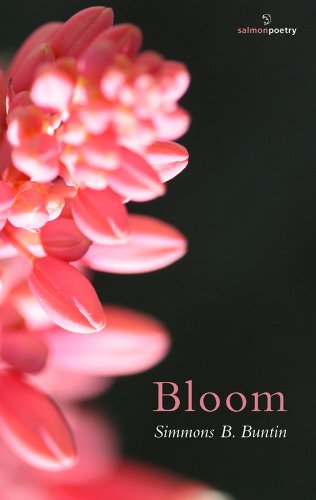 Synopsis: Set largely in the rugged but resplendent borderlands of Arizona and Sonora, Mexico--and ranging as far afield as the Israeli desert, the Sweden of his mother's youth, the Midway Atoll, and Hiroshima, Japan, on the 40th anniversary of the dropping of the atomic bomb--Bloom, Simmons B. Buntin's second collection of poems gathers unexpected insight from our built and natural landscapes to blossom into poems of striking beauty and stunning realization.

'Shine', the book's first section, ranges from the violet light of the last night in Eden to a daughter's coming of age and desire. 'Flare', the second section, weaves from roadside wildflowers to an evening in SoHo to a mother's memory of Nazi bombers overhead before her own storied migrations to America. And 'Inflorescence', the final section, braids the experience of a daughter recovering from emergency surgery following a severe accident, with the slow and mesmerizing bloom--or inflorescence--of the yard's magnificent agave.

In reading the poems of this finely crafted and lyrical book, you'll find that--like the daughter releasing ladybugs in the poem 'Shower'--the open room of your heart, too, will be filled with "pure red joy."

About the Author: Simmons B. Buntin is the American author of two books of poems, Bloom, published in fall 2010, and Riverfall, published in 2005. Both books are published by Ireland's Salmon Poetry. His award-winning poetry and prose have appeared in numerous North American, European, and Asian journals and anthologies.

He is the founding editor of the acclaimed international journal Terrain.org: A Journal of the Built & Natural Environments, for which he also writes a regular editorial. He is the recipient of the Colorado Artists Fellowship for Poetry, an Academy of American Poets prize, and grants by the Arizona Commission on the Arts and Tucson Pita Arts Council.

He is an avid photographer, website designer, and all-around rabblerouser who lives with his wife and two daughters in the Sonoran desert of southern Arizona.

Book Description Salmon Poetry, 2011. Condition: Good. A+ Customer service! Satisfaction Guaranteed! Book is in Used-Good condition. Pages and cover are clean and intact. Used items may not include supplementary materials such as CDs or access codes. May show signs of minor shelf wear and contain limited notes and highlighting. Seller Inventory # 1907056491-2-4