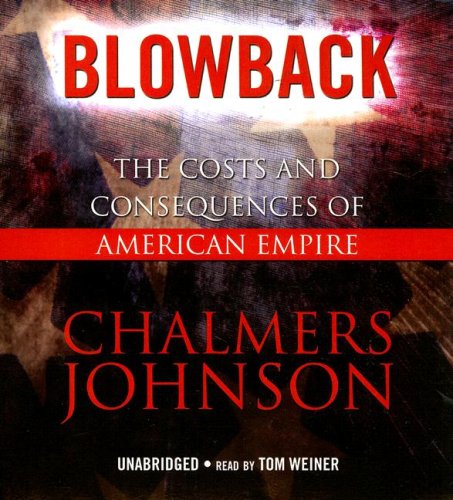 Blowback: The Costs and Consequences of American Empire (Blowback Trilogy)

Synopsis: The term "blowback," invented by the CIA, refers to the unintended consequences of American actions abroad. In this incisive and controversial book, Chalmers Johnson lays out in vivid detail the dangers faced by our overextended empire, which insists on projecting its military power to every corner of the earth and using American capital and markets to force global economic integration on its own terms. From a case of rape by U.S. servicemen in Okinawa to our role in Asia's financial crisis, from our early support for Saddam Hussein to our conduct in the Balkans, Johnson reveals the ways in which our misguided policies are planting the seeds of future disaster.

Review: If the 20th century was the American century, the 21st century may be a time of reckoning for the United States. Chalmers Johnson, an authority on Japan and its economy, offers a troubling prognosis of what's to come. Blowback--the title refers to a CIA neologism describing the unintended consequences of American activity--is a call for the United States to rethink its position in the world. "The evidence is building up that in the decade following the end of the Cold War, the United States largely abandoned a reliance on diplomacy, economic aid, international law, and multilateral institutions in carrying out its foreign policies and resorted much of the time to bluster, military force, and financial manipulation," writes Johnson. "The world is not a safer place as a result." Individual chapters focus on Okinawa (where American servicemen were accused of raping a 12-year-old girl in "Asia's last colony"), the two Koreas, China, and Japan. The result is a liberal-leaning (and Asia-centric) call for the United States to disengage from many of its global commitments. Critics will call Johnson an isolationist, but friends (perhaps admirers of Patrick Buchanan's A Republic, Not an Empire) will say he simply speaks good sense. All will agree he is an earnest voice: "I believe our very hubris ensures our undoing." --John J. Miller

1. Blowback: The Costs and Consequences of American Empire (Blowback Trilogy)

2. Blowback: The Costs and Consequences of American Empire (Blowback Trilogy)

3. Blowback - The Costs and Consequences of American Empire

4. Blowback: The Costs and Consequences of American Empire