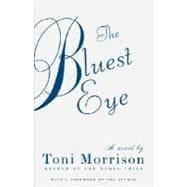 Pecola Breedlove, a young black girl, prays every day for beauty. Mocked by other children for the dark skin, curly hair, and brown eyes that set her apart, she yearns for normalcy, for the blond hair and blue eyes that she believes will allow her to finally fit in.Yet as her dream grows more fervent, her life slowly starts to disintegrate in the face of adversity and strife. A powerful examination of our obsession with beauty and conformity, Toni Morrison’s virtuosic first novel asks powerful questions about race, class, and gender with the subtlety and grace that have always characterized her writing.

"You can't go wrong by reading or re-reading the collected works of Toni Morrison. Beloved, Song of Solomon, The Bluest Eye, Sula, everything else — they're transcendent, all of them. You’ll be glad you read them."--Barack Obama

eCampus's mission is to set online bookstore industry standards for savings, selection, convenience and customer service as expressed in the company's slogan "Textbooks Easy. Fast. Cheap!" The company celebrated 15 years in business in 2015 and will continue to provide students with an easy, fast and cheap way to order their textbooks and materials for years to come.