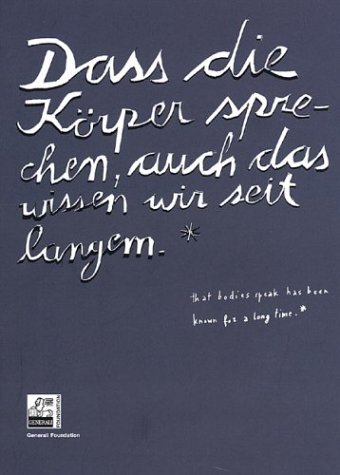 That Bodies Speak Has Been Known For A Long Time

Synopsis: Taking its title from Deleuze, this exhibition and catalogue consider the body linguistically. In what sense do bodies produce language, how are they themselves grasped and defined by it, and what spaces for action are opened up by this understanding? With art by John Baldessari, Allan Kaprow, Mary Kelly, Francesca Woodman and others.

About the Author: John Baldessari was born in National City, California in 1931, and lives and works in Santa Monica, California. His work has been exhibited in museums such as The Solomon R. Guggenheim Foundation, New York, and in art galleries worldwide. He has also recently curated exhibitions at The Hirshhorn Museum and Sculpture Garden, in Washington D.C., The Museum of Modern Art, New York and The Museum of Contemporary Art in Los Angeles. He is represented by Marian Goodman Gallery in New York.

Robert Longo was born in 1953 in Brooklyn. His large-scale drawings of photo-realistic scenes, for which he is best known, have been exhibited internationally, most recently in solo exhibitions at the Jewish Museum in Berlin, Metro Pictures in New York and the Albertina in Vienna.

Antoni Muntadas was born in Barcelona in 1942 and has lived and worked in New York since 1971. Among his many honors are prizes and grants from the Guggenheim and Rockefeller Foundations, the National Endowment for the Arts and the New York State Council on the Arts. His works have been exhibited at important international events including two Documentas and biennials in Venice, Sao Paulo and Lyons, as well as at institutions including The Museum of Modern Art, New York, and the Guggenheim Museum, New York.

Rosemarie Trockel was born in 1952 in Schwerte, Germany. She studied painting in Cologne in the mid-70s, and had her debut show at Galerie Philomene Magers in Bonn, in 1983; since then, she has exhibited widely in Europe and North America, including in such major shows as the 1996 and 1999 Venice Biennales, the 1995 and 1999 Istanbul Biennials, and Documenta X. Recent solo exhibitions were presented at the Sammlung Goetz, Munich and the Kunsthalle, Hamburg. Trockel lives and works in Cologne.

Catherine Opie has been the subject of one-person shows at the Museum of Contemporary Art, Los Angeles; the Museum of Contemporary Art, Chicago; and the St. Louis Art Museum. Her work is in the collections of the Solomon R. Guggenheim Museum, New York, and the Walker Art Center, Minneapolis, among many others. She teaches photography at the University of California, Los Angeles.

1. That Bodies Speak Has Been Known For A Long Time

2. That Bodies Speak Has Been Known for a Long Time

3. That Bodies Speak Has Been Known For A Long Time

4. That Bodies Speak Has Been Known For A Long Time

5. That Bodies Speak Has Been Known For A Long Time

Book Description Walther König, Köln, 2004. Condition: Good. A+ Customer service! Satisfaction Guaranteed! Book is in Used-Good condition. Pages and cover are clean and intact. Used items may not include supplementary materials such as CDs or access codes. May show signs of minor shelf wear and contain limited notes and highlighting. Seller Inventory # 3883758027-2-4