Items related to The Book of Greek and Roman Folktales, Legends, and... 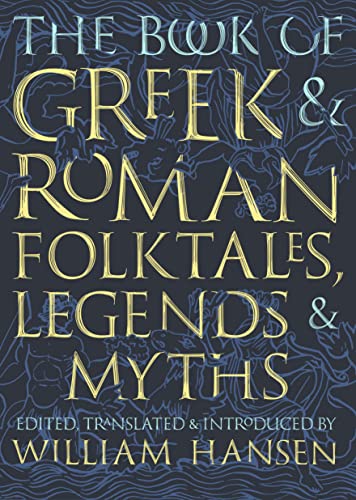 The Book of Greek and Roman Folktales, Legends, and Myths

Title: The Book of Greek and Roman Folktales, ...

Captured centaurs and satyrs, talking animals, people who suddenly change sex, men who give birth, the temporarily insane and the permanently thick-witted, delicate sensualists, incompetent seers, a woman who remembers too much, a man who cannot laugh―these are just some of the colorful characters who feature in the unforgettable stories that ancient Greeks and Romans told in their daily lives. Together they created an incredibly rich body of popular oral stories that include, but range well beyond, mythology―from heroic legends, fairy tales, and fables to ghost stories, urban legends, and jokes. This unique anthology presents the largest collection of these tales ever assembled. Featuring nearly four hundred stories in authoritative and highly readable translations, this is the first book to offer a representative selection of the entire range of traditional classical storytelling.

Set mostly in the world of humans, not gods, these stories focus on figures such as lovers, tricksters, philosophers, merchants, rulers, athletes, artists, and soldiers. The narratives range from the well-known―for example, Cupid and Psyche, Diogenes and his lantern, and the tortoise and the hare―to lesser-known tales that deserve wider attention. Entertaining and fascinating, they offer a unique window into the fantasies, anxieties, humor, and passions of the people who told them.

Complete with beautiful illustrations by Glynnis Fawkes, a comprehensive introduction, notes, and more, this one-of-a-kind anthology will delight general readers as well as students of classics, fairy tales, and folklore.

"This is an extraordinary collection of tales that are remarkable for their diversity and how contemporary they seem. Indeed, these ancient Greek and Roman stories, ably translated by William Hansen, forged most of the modern European genres such as the fable, legend, novella, fairy tale, anecdote, joke, and children's story. Hansen's work is an invaluable source not only for scholars but also for readers of contemporary fantasy and fairy tales."--Jack Zipes, translator and editor of The Original Folk and Fairy Tales of the Brothers Grimm

"William Hansen's marvelous treasury lets us experience for ourselves the timeless tales that made the ancient Greeks and Romans think, shudder, and laugh."--Adrienne Mayor, author of The Amazons

"A wonderful book. William Hansen has produced a hugely entertaining and informative anthology of ancient Greek and Roman folktales, legends, myths, fables, jokes, and much more. Nothing seems to have escaped his probing gaze. When it comes to the study of Greek and Roman verbal arts, there is absolutely nothing else like this. It is a pure delight and impossible to put down."--Richard P. Martin, Stanford University