Items related to Bosch And Bruegel - From Enemy Painting To Everyday... 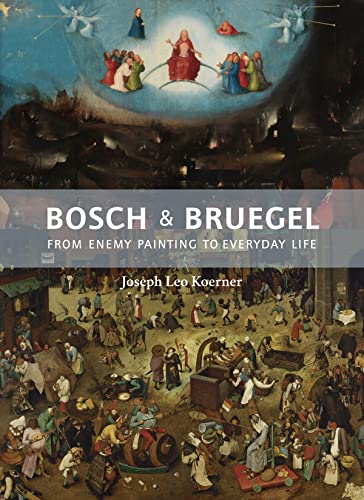 Bosch And Bruegel - From Enemy Painting To Everyday Life

Title: Bosch And Bruegel - From Enemy Painting To ...

In this visually stunning and much anticipated book, acclaimed art historian Joseph Koerner casts the paintings of Hieronymus Bosch and Pieter Bruegel in a completely new light, revealing how the painting of everyday life was born from what seems its polar opposite: the depiction of an enemy hell-bent on destroying us.

Supreme virtuoso of the bizarre, diabolic, and outlandish, Bosch embodies the phantasmagorical force of painting, while Bruegel, through his true-to-life landscapes and frank depictions of peasants, is the artistic avatar of the familiar and ordinary. But despite their differences, the works of these two artists are closely intertwined. Bruegel began his career imitating Bosch's fantasies, and it was Bosch who launched almost the whole repertoire of later genre painting. But Bosch depicts everyday life in order to reveal it as an alluring trap set by a metaphysical enemy at war with God, whereas Bruegel shows this enemy to be nothing but a humanly fabricated mask. Attending closely to the visual cunning of these two towering masters, Koerner uncovers art history’s unexplored underside: the image itself as an enemy.

An absorbing study of the dark paradoxes of human creativity, Bosch and Bruegel is also a timely account of how hatred can be converted into tolerance through the agency of art. It takes readers through all the major paintings, drawings, and prints of these two unforgettable artists―including Bosch’s notoriously elusive Garden of Earthly Delights, which forms the core of this historical tour de force. Elegantly written and abundantly illustrated, the book is based on Koerner’s A. W. Mellon Lectures in the Fine Arts, a series given annually at the National Gallery of Art, Washington.

"In this magisterial book, Joseph Koerner explores the role of Bosch and Bruegel in the great early modern shift of the ends of art from theological explanation to time-bound description, from being to picturing. Along the way, he offers a rich account of a newly global culture and a violently contested religious milieu where the status of images was itself an issue of life and death."--Susan Stewart, author of On Longing and The Poet's Freedom: A Notebook on Making

"A tremendous achievement. Koerner is one of the most gifted and intelligent art historians at work anywhere, as well as a remarkably fluent and resourceful stylist capable of presenting extremely subtle and persuasive readings in elegant and simple prose."--Michael Fried, author of The Moment of Caravaggio

"Insightful and encyclopedic. Koerner renders fresh and thought-provoking paintings that have been seen and discussed for centuries."--Keith Moxey, author of Visual Time: The Image in History


Our warehouses across the globe are fully operational without substantial delays. We are working hard and continue to overcome the daily challenges presented by COVID-19. PLEASE NOTE, USPS is experiencing delays due to COVID employee restrictions and unfortunately this means items may not arrive on the date promised. For more information, please refer to USPS's website.

Currently we are unable to ship to the following States: AA, AE, AP, VI, AE, AS, FM GU, MH, MP, PW, VI. We apologize for the inconvenience.