Items related to Britten and Auden in the Thirties: The Year 1936 (Aldeburgh... 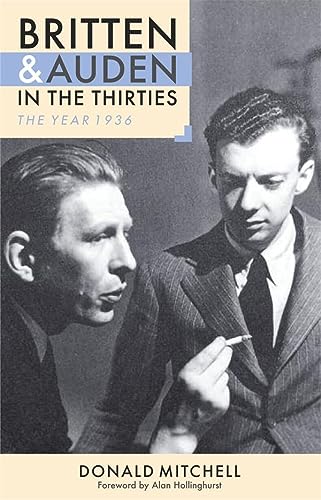 Britten and Auden in the Thirties: The Year 1936 (Aldeburgh Studies in Music)

Title: Britten and Auden in the Thirties: The Year ...

Benjamin Britten and W.H. Auden were key figures of the 1930s, and here Donald Mitchell traces their lives during one crucial year, 1936. They worked hard to establish themselves, first through the GPO film unit, in a collaboration which flowered and spilled over into the theatre, and then radio - a new medium that the liveliest creative minds of the time were exploring and exploiting.Britten and Auden also joined forces in works destined for the recital room and concert hall, among them Our Hunting Fathers, the political symbolism of which Donald Mitchell examines in depth, and On the Island, settings of early Auden that comprised Britten's first important set of songs to English texts. Much use is made of Britten's private diaries, which he kept on a daily basis, and a revealing portrait emerges of the two men's relationship, of their work together in many different fields, and of the reflection within that work of political ideas current at the time. DONALD MITCHELL was Britten's close friend and publisher from 1964 until the end of the composer's life, and his authorised biographer. The T S Eliot Memorial Lectures delivered in 1979

DONALD MITCHELL was Britten's close friend and publisher from 1964 until the end of the composer's life, and his authorised biographer.