Items related to The Brownsville Raid 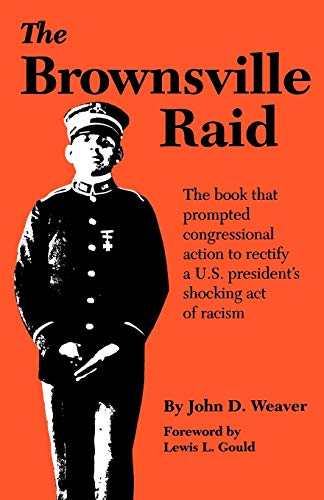 A+ Customer service! Satisfaction Guaranteed! Book is in Used-Good condition. Pages and cover are clean and intact. Used items may not include supplementary materials such as CDs or access codes. May show signs of minor shelf wear and contain limited notes and highlighting. Seller Inventory # 0890965285-2-4

Around midnight on August 13, 1906, shots rang out on the road between Brownsville, Texas, and Fort Brown, the old army garrison. Ten minutes later a young civilian lay dead, and angry residents swarmed the streets, convinced their homes had been terrorized by newly arrived soldiers. Inside Fort Brown, the alarm was sounded. Soldiers leaped from their bunks and grabbed their rifles, thinking they were under attack by hostile townspeople. The soldiers were black; the civilians were white.

Still proclaiming their innocence, 167 black infantrymen of the segregated Twenty-fifth Infantry Regiment were summarily dismissed without honor (or a trial) by President Theodore Roosevelt.

The Brownsville Raid, first published in 1970, is John D. Weaver’s searching study of the flimsy evidence presented in a 1909-1910 court of inquiry. That court had upheld the president’s action and closed the case against the soldiers, not one of whom had ever been found guilty of wrongdoing. The case remained closed until 1971 when, after reading The Brownsville Raid, Congressman Augustus F. Hawkins of Los Angeles introduced a bill to have the Defense Department rectify the injustice.

Amid a flurry of national publicity, honorable discharges were finally granted in 1972. All were posthumous except for that of Private Dorsie Willis, who received his in a moving ceremony on his eighty-seventh birthday.

JOHN D. WEAVER’s ten books include a novel based on the 1932 Bonus March, the seminal biography of Chief Justice Earl Warren, Glad Tidings, his thirty-seven year correspondence with John Cheever, and The Senator and the Sharecropper’s Son, the sequel to The Brownsville Raid