Home David F. Dufty How to Build an Android: The True Story of Philip K. Dick's ... 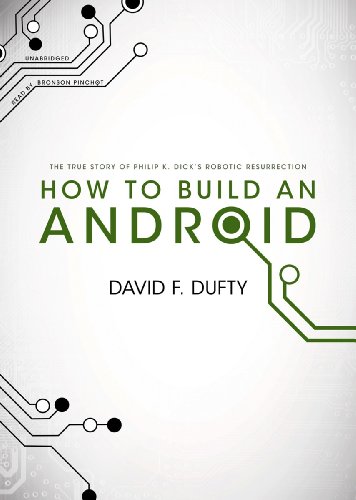 How to Build an Android: The True Story of Philip K. Dick's Robotic Resurrection

Synopsis: [This is the MP3CD audiobook format in vinyl case.]

The stranger-than-fiction story of the ingenious creation and loss of an artificially intelligent android of science fiction writer Philip K. Dick

In late January 2006, a young robotocist on his way to Google headquarters lost an overnight bag on a flight somewhere between Dallas and Las Vegas. In it was the fully functional head of an android replica of Philip K. Dick, cult science fiction writer and counterculture guru. It has never been recovered.

In a story that echoes some of the most paranoid fantasies of a Dick novel, listeners will get a fascinating inside look at the scientists and technology that made this amazing android possible. The author, who was a fellow researcher at the University of Memphis Institute for Intelligent Systems while the android was being built, introduces listeners to the cutting-edge technology in robotics, artificial intelligence, and sculpture that came together in this remarkable machine and captured the imagination of scientists, artists, and science fiction fans alike. There are also great stories about Dick himself -- his inspired yet deeply pessimistic worldview, his bizarre lifestyle, and his enduring creative legacy. In the tradition of popular science classics such as Packing for Mars and The Disappearing Spoon, How to Build an Android is entertaining and informative -- popular science at its best.

About the Author: DAVID F. DUFTY is a senior research officer at the Australian Bureau of Statistics. He was a postdoctoral fellow at the University of Memphis at the time the android was being developed and worked closely with the team of scientists who created it. He completed a psychology degree with honors at the University of Newcastle and has a PhD in psychology from Macquarie University.

1. How to Build an Android - The True Story of Philip K. Dick's Robotic Resurrection

2. How to Build an Android: The True Story of Philip K. Dick's Robotic Resurrection