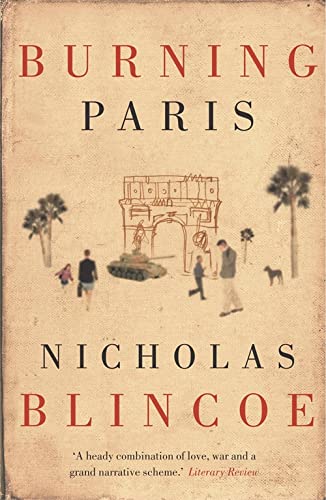 Synopsis: When James Beddoes, a former financial journalist, moves to Paris, it is ostensibly to write a novel based on the diaries of Paul-Antoine Brunel, a French lieutenant who became a leader of the Paris Commune during the Siege of Paris in 1870. But James is also in Paris to pursue a Frenchwoman, Flavie, whom he met at a party and with whom he has become infatuated. Although it soon becomes clear that Flavie is gay, James nonetheless becomes drawn into her volatile emotional relationships, all the while secretly hoping that he can change her mind. And in parallel, amid the political struggles and the battles of the Paris Siege, another love story is unfolding - between Brunel and Babette, a married restaurateur. But when James follows Flavie to Palestine, and as the Paris Siege intensifies, all four protagonists are brought face to face with the brutal reality of civil war.

About the Author: Nicholas Blincoe is the author of four previous novels including the award-winning MANCHESTER SLINGBACK and the acclaimed THE DOPE PRIEST and WHITE MICE. Born in Rochdale, he attended art college before going to Warwick University, where he completed a PhD in contemporary European philosophy. He is also a screenwriter and a founder member of the New Puritans movement.

Book Description Sceptre, 2005. Paperback. Condition: Used; Good. We are committed to providing each customer with the highest standard of customer service. All books are picked, packed and dispatched from the United Kingdom. Seller Inventory # FH1811102

Book Description Sceptre 28/03/2005, 2005. Paperback. Condition: Very Good. Shipped within 24 hours from our UK warehouse. Clean, undamaged book with no damage to pages and minimal wear to the cover. Spine still tight, in very good condition. Remember if you are not happy, you are covered by our 100% money back guarantee. Seller Inventory # 6545-9780340734698

Book Description -. Paperback. Condition: Very Good. Burning Paris This book is in very good condition and will be shipped within 24 hours of ordering. The cover may have some limited signs of wear but the pages are clean, intact and the spine remains undamaged. This book has clearly been well maintained and looked after thus far. Money back guarantee if you are not satisfied. See all our books here, order more than 1 book and get discounted shipping. Seller Inventory # 7719-9780340734698

Book Description Sceptre, 2005. Paperback. Condition: Good. All orders are dispatched the following working day from our UK warehouse. Established in 2004, we have over 500,000 books in stock. No quibble refund if not completely satisfied. Seller Inventory # mon0003533714

Book Description Sceptre, 2005. Paperback. Condition: Used; Good. **Simply Brit** Shipped with Premium postal service within 24 hours from the UK with impressive delivery time. We have dispatched from our book depository; items of good condition to over ten million satisfied customers worldwide. We are committed to providing you with reliable and efficient service at all times. Seller Inventory # 2567694

Book Description Sceptre, 2005. Paperback. Condition: Used; Good. Ex Library Copy **SHIPPED FROM UK** We believe you will be completely satisfied with our quick and reliable service. All orders are dispatched as swiftly as possible! Buy with confidence!. Seller Inventory # 3609201

Book Description Sceptre, 2005. Condition: Good. Shows some signs of wear, and may have some markings on the inside. Seller Inventory # GRP71687222