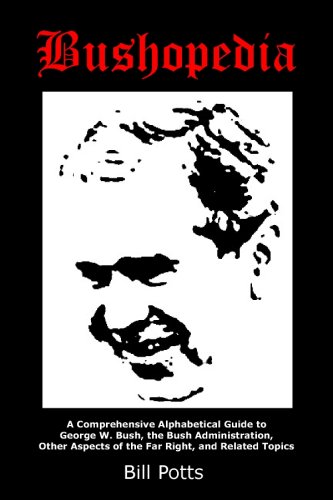 Bushopedia: A Commprehensive Alphabetical Guide to George W. Bush, the Bush Administration, Other Aspects of the Far Right, and Related Topics

Bushopedia deals with the corruption and many depredations of the Bush administration, the Republican Party, Republicans in Congress, right wing organizations, hypocrisy, and on and on. It does so with wit, wry humor and the words of Bush himself (including quite a few of his famous Bushisms) and many others. Readers have found it to be useful, both as a reference and as a narrative that can be read straight through for entertainment and information.

Bill Potts has spent the last 29 years in California. He was born and raised in England, and lived in Canada for 20 years. He now lives, with his wife of 46 years, in Roseville, CA. He is a comparatively recent political junkie, having spent his career in the computer field (starting in 1958). In addition to developing seminars, teaching, writing manuals for clients in Silicon Valley, and writing the occasional article, he has written two previous books (The McGraw-Hill Data Communications Dictionary and The Simple Modem Book), both of which are now out of date. He has worked on Bushopedia for the last three years.