Items related to The Business of Fancydancing 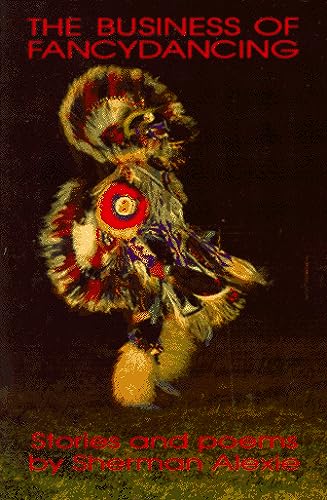 AbeBooks Seller Since May 19, 2005 Seller Rating

True first edition, first printing of author's first book. Signed by Alexie on the title page. This is the issue in softcover, presumably one of 1000, there were also 100 hardbound copies issued simultaneously. A near fine clean tight copy with no markings apart from the author's signature. Light edgewear and one small scrape to rear cover. Uncommon. Bookseller Inventory # 001173

Title: The Business of Fancydancing

Poetry. Fiction. Published in 1992, well before Sherman Alexie became well-known as the screenwriter for the film SMOKE SIGNALS, THE BUSINESS OF FANCYDANCING has now been turned into a film with none other than Alexie himself in his directorial debut. The screenplay for the movie, which recently won the Audience Award at the San Francisco Film Festival, is loosly adapted from this book. Many film-goers will want to visit or revisit the elegaic poems and stories that set the tone for the film itself. "In an age when many 'Native American' writers publish books that prove their ignorance of the real Indian world, Sherman Alexie paints painfully honest visions of our beautiful and brutal lives"—Adrian C. Louis.

Sherman Alexie's poems, fiction, essays and films have won him an international following since his first book, THE BUSINESS OF FANCYDANCING, was published in 1992. SMOKE SIGNALS, the film he adapted from one of his short stories and co-produced, enlarged his audience still further. Alexie's awards include the Stranger Genius Award in Literature, the Boston Globe-Horn Book Awards for Excellence in Children's Literature in Fiction, and the National Book Award for Young People's Literature as well as honors and awards from the National Endowment for the Arts, the Lila Wallace Reader's Digest Foundation, and a citation as "One of 20 Best American Novelists Under the Age of 40" from Granta magazine. An enrolled Spokane/Coeur d'Alene Indian, Alexie lives in Seattle with his wife and sons.


All books guaranteed as described and are returnable within the standard ABE return policy with prior notification of return via email. All books are offered subject to prior sale. Email inquiries and questions answered at our earliest convenience.
Terms of sale: checks and money orders preferred from US customers, we also accept Visa and MasterCard through ABE.