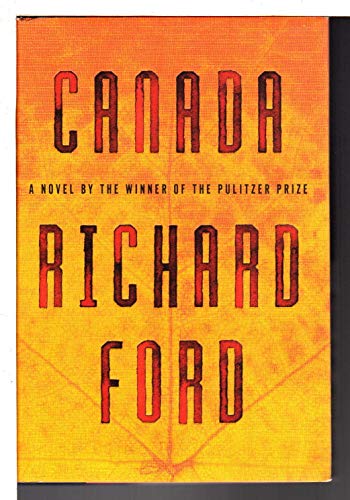 Signed and dated "May 31, 2012" by author on half-title page in black fountain ink. Author of the Bascombe novels, which include THE SPORTWRITER and its sequels, INDEPENDENCE DAY--the first novel to win the Pulitzer Prize and the PEN/Faulkner Award--and THE LAY OF THE LAND, as well as the short story collections ROCK SPRINGS and A MULTITUDE OF SINS, which contain many widely-anthologized stories. Ford is the winner of the American Library Association's 2013 Carnegie Medal for Excellence, receiving their fiction citation for CANADA. New, unread copy, opened only for signing, in new, mylar-protected dust jacket. L114. Bookseller Inventory # 019841

The only writer ever to win both the Pulitzer Prize and Pen/Faulkner Award for a single novel (Independence Day) Richard Ford follows the completion of his acclaimed Bascombe trilogy with Canada. After a five-year hiatus, an undisputed American master delivers a haunting and elemental novel about the cataclysm that undoes one teenage boy’s family, and the stark and unforgiving landscape in which he attempts to find grace.

A powerful and unforgettable tale of the violence lurking at the heart of the world, Richard Ford’s Canada will resonate long and loud for readers of stark and sweeping novels of American life, from the novels of Cheever and Carver to the works of Philip Roth, Charles Frazier, Richard Russo, and Jonathan Franzen.

"First, I'll tell about the robbery our parents committed. Then about the murders, which happened later."

When fifteen-year-old Dell Parsons' parents rob a bank, his sense of normal life is forever altered. In an instant, this private cataclysm drives his life into before and after, a threshold that can never be uncrossed.

His parents' arrest and imprisonment mean a threatening and uncertain future for Dell and his twin sister, Berner. Willful and burning with resentment, Berner flees their home in Montana, abandoning her brother and her life. But Dell is not completely alone. A family friend intervenes, spiriting him across the Canadian border, in hopes of delivering him to a better life. There, afloat on the prairie of Saskatchewan, Dell is taken in by Arthur Remlinger, an enigmatic and charismatic American whose cool reserve masks a dark and violent nature.

Undone by the calamity of his parents' robbery and arrest, Dell struggles under the vast prairie sky to remake himself and define the adults he thought he knew. But his search for grace and peace only moves him nearer to a harrowing and murderous collision with Remlinger, an elemental force of darkness.

A true masterwork of haunting and spectacular vision from one of our greatest writers, Canada is a profound novel of boundaries traversed, innocence lost and reconciled, and the mysterious and consoling bonds of family. Told in spare, elegant prose, both resonant and luminous, it is destined to become a classic.