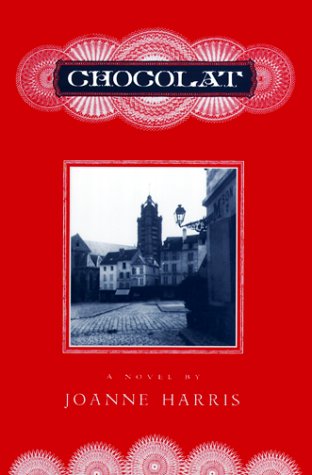 Unique association copy of this scarce title, signed by film director Lasse Halstrom, in black fountain ink on title page. Basis of the beloved classic movie by Lasse Halstrom about a woman and her daughter who open a chocolate shop in a small French village that shakes up the rigid morality of the community, CHOCOLAT stars Johnny Depp, Juliet Binoche, and Judi Dench, and was nominated for five Oscars. CHOCOLAT was also shortlisted for a Whitbread Best Novel Award. Very fine, unread. first edition, first printing, y, in fine, mylar-protected dust jacket. {Not remainder-marked or price-clipped} L113. Bookseller Inventory # 022435

A timeless novel of the small French village of Lansquenet's awakening to joy and sensuality tells the story of how bewitching newcomer Vianne Rocher and her chocolate shop arrive and begin to play havoc with everyone's Lenten vows. A first novel. 22,000 first printing.

Vianne Rocher and her 6-year-old daughter, Anouk, arrive in the small village of Lansquenet-sous-Tannes--"a blip on the fast road between Toulouse and Bourdeaux"--in February, during the carnival. Three days later, Vianne opens a luxuriant chocolate shop crammed with the most tempting of confections and offering a mouth-watering variety of hot chocolate drinks. It's Lent, the shop is opposite the church and open on Sundays, and Francis Reynaud, the austere parish priest, is livid.

One by one the locals succumb to Vianne's concoctions. Joanne Harris weaves their secrets and troubles, their loves and desires, into her third novel, with the lightest touch. There's sad, polite Guillame and his dying dog; thieving, beaten-up Joséphine Muscat; schoolchildren who declare it "hypercool" when Vianne says they can help eat the window display--a gingerbread house complete with witch. And there's Armande, still vigorous in her 80s, who can see Anouk's "imaginary" rabbit, Pantoufle, and recognizes Vianne for who she really is. However, certain villagers--including Armande's snobby daughter and Joséphine's violent husband--side with Reynaud. So when Vianne announces a Grand Festival of Chocolate commencing Easter Sunday, it's all-out war: war between church and chocolate, between good and evil, between love and dogma.

Reminiscent of Herman Hesse's short story "Augustus," Chocolat is an utterly delicious novel, coated in the gentlest of magic, which proves--indisputably and without preaching--that soft centers are best. --Lisa Gee, Amazon.co.uk