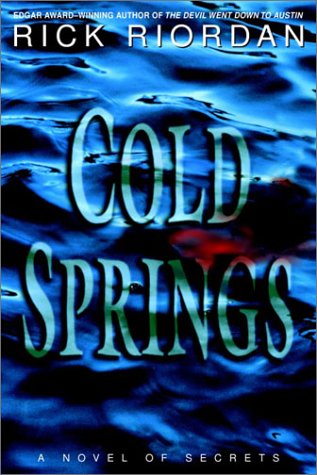 The Edgar, Shamus, and Anthony award-winning Rick Riordan delivers a spellbinding novel of a man on an edge so extreme that his fall will destroy not only him--but all that he holds dear.

Chadwick’s life was balanced on a knife’s edge--his career, his marriage, his
relationship with his dangerously troubled daughter. And then one autumn night, the worst possible thing happened....

Now, a decade later, Chadwick’s heart is on the mend. Working for an old military buddy, he saves kids for a living, escorting troubled teens to a Texas wilderness school that specializes in the toughest brand of love.

Until he gets a phone call that threatens to shatter his new life.

Mallory Zedman is taking the same terrible path Chadwick’s own daughter once took. Defiant and out of control, Mallory is determined to destroy herself and anyone who tries to stop her. No sooner does Chadwick snatch her off the streets than he discovers she is wanted for questioning in a brutal murder--a slaying that seems directly linked to Chadwick’s past.To save Mallory, tough love will not be enough. Chadwick must find the truth behind the murder--and in doing so revisit the infidelities, shattered promises, and violent passions that cracked his world apart. And he must jeopardize the one thing he still has left to lose--a slim hope of redemption.

Aptly subtitled "A Novel of Secrets," this dark, probing tale examines the destructive ripple effects of a child's death on those around her--especially after doubts arise whether it was accident, suicide, or murder. In the harrowing opening pages, 16-year-old Katherine Chadwick ODs on heroin while babysitting little Mallory, daughter of her parents' best friends. Then the tale leaps forward nine years: both couples' marriages are in ruins; Katherine's father, once a schoolteacher, is now a bruising "escort" for a reform school in the Texas outback called Cold Springs; and his next assignment is to capture none other than Mallory, now 15 and in trouble.

Texas native Riordan, whose Tres Navarre series has earned acclaim and awards, evokes the landscapes around Cold Springs with vividness and authority, and also brings that sensibility to the book's Bay Area scenes:

Chadwick ... stepped out into the growing gloom of the evening. Down the block, he could hear the lowrider cruising, its stereo setting off car alarms all across the neighborhood like a bloodhound flushing quail.

But it's the book's complex plot and richly realized people--most notably its troubled teenagers (Riordan is a middle-school teacher)--that give Cold Springs substance and heft. You may need to persist through some tangled exposition in the first 75 pages or so, but the payoff is well worth it. The long climax offers a stunning series of cascading revelations, including a final kicker that changes everything. Riordan is the real deal. --Nicholas H. Allison