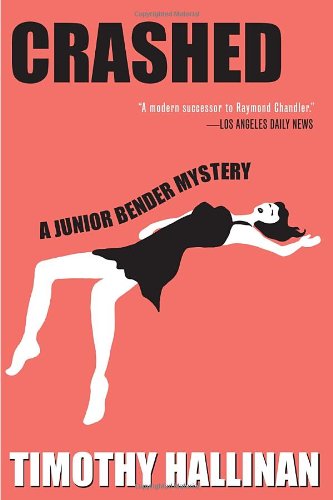 Signed by author on title page in black fountain ink. The Edgar and Macavity-nominated author of thirteen novels. Hallinan is the author of the 'Poke Rafferty' (A NAIL IN THE HEART, THE QUEEN OF PATPONG, THE FEAR ARTIST) series and 'Simon Grist' (THE FOUR LAST THINGS, EVERYTHING BUT THE SEQUEL, THE BONE POLISHER) series. CRASHED is the third entry in his 'Junior Bender' his newest series about a burglar become a private investigator, and is preceded by LITTLE ELVISES and THE FAME THIEF. As new, unread, first edition, first printing, in fine, mylar-protected dust jacket. {Not remainder-marked or price lipped} M86. Bookseller Inventory # 020907

The trouble is, he’s not sure he can go through with the job, blackmail or no blackmail. The actress lined up to star in the film, Thistle Downing, is an ex-child star who now lives alone in a drug-induced stupor, destitute and uninsurable. This movie would be scandalous fodder for tabloids around the country. Junior knows what he should do—get Thistle out and find her some help—but doing the right thing will land him on the wrong side of some scary people.

Timothy Hallinan is the Edgar- and Macavity-nominated author of thirteen widely praised books, including The Fear Artist, Crashed, Little Elvises, and The Fame Thief. After years of working in Hollywood, television, and the music industry, he now writes fulltime. He divides his time between California and Thailand.