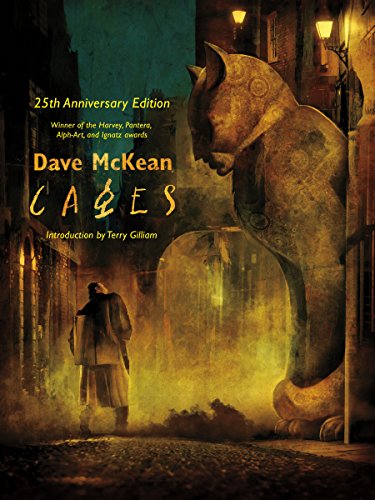 Synopsis: Best known for his collaborations with Neil Gaiman, McKean defied expectations with his stunning debut as writer and artist in Cages, winner of multiple awards for Best Graphic Album.

Filled with complex characters, intriguing flights of fancy, and all the beautiful visuals you'd expect from the director of MirrorMask, Cages is McKean's magnum opus. It chronicles the intersecting lives of a painter, a writer, and a musician living in the same apartment building, and is a profound rumination on art, God, cats, and the cages we build for ourselves.

About the Author: David Tench McKean is an illustrator, photographer, comic book artist, graphic designer, filmmaker and musician. His work incorporates drawing, painting, photography, collage, found objects, digital art and sculpture.
After a trip to New York in 1986 during which he failed to find work as a comics artist, McKean met writer Neil Gaiman and the pair collaborated on a short graphic novel of disturbing childhood memories, Violent Cases, published in 1987. This was followed in 1988 by a Black Orchid miniseries (again with Gaiman) and Hellblazer covers for DC Comics. Beginning in 1989 he produced the covers for Gaiman's celebrated series The Sandman, all its collected editions and many of its spin-offs, and the Batman graphic novel, Arkham Asylum: A Serious House on Serious Earth, with writer Grant Morrison (1989). McKean has gone on to collaborate further with Neil Gaiman in both print and film.

Book Description imusti, 2016. Paperback. Condition: VERY GOOD. Pages are intact and are not marred by notes or highlighting, but may contain a neat previous owner name. The spine remains undamaged. Seller Inventory # 1506700845_abe_vg

Book Description imusti, 2016. Paperback. Condition: GOOD. Has little wear to the cover and pages. Contains some markings such as highlighting and writing. Seller Inventory # 1506700845_abe_gd