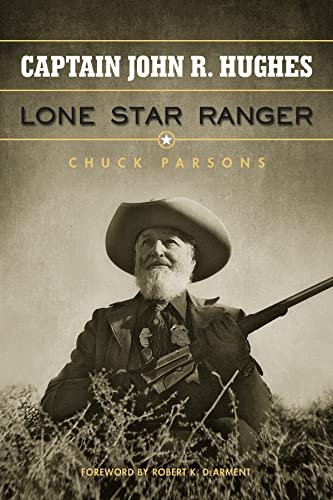 Winner of the Best Book Award from the Wild West History Association, 2012

Winner of the Co-Founders Best Book Award from Westerners International, 2012.

Captain John R. Hughes, Lone Star Ranger is the first full and complete modern biography of a man who served as a Texas Ranger from 1887 until early 1915. He came to the attention of the Rangers after doggedly trailing horse thieves for nearly a year and recovering his stolen stock. After helping Ranger Ira Aten track down another fugitive from justice, Hughes then joined Company D of the Texas Rangers on Aten’s recommendation, intending to stay for only a few months; he remained in the service for nearly thirty years.
When Sgt. Charles Fusselman was killed by bandits, Hughes took his place. When Captain Frank Jones was killed by bandits in 1893, Hughes was named captain of Company D. As captain, Hughes and his men searched the border and identified every bandit involved in the killing of Jones. They all received justice.
Toward the end of his career Hughes became a senior captain based in Austin, and in 1915, having served as a captain and ranger longer than any other man, he retired from the force. His later years were happy ones, with traveling and visiting friends and relatives. He became a Texas icon and national celebrity, receiving more awards and honors than any other Texas Ranger, before or since.
Due to Chuck Parsons’s extensive research, we now know more about Hughes than ever before. This biography of one of the “Four Great Captains” sheds light on his life prior to becoming a Texas Ranger and on his love interest, though he never married. From joining Company D in 1887 until retirement, Hughes served the state honestly and proudly, earning the respect of all he met. Zane Grey dedicated his most popular novel, The Lone Star Ranger, to Hughes and his Rangers.