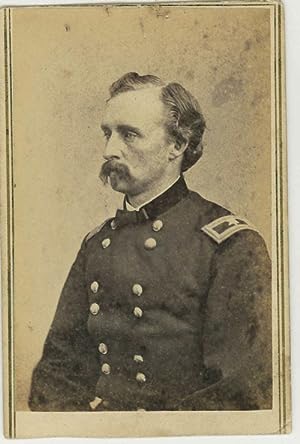 Published by Printed by Anthony from the negative by Brady, [New York, 1865
Condition: Very slight mottling to image
Save for Later
From James Cummins Bookseller, ABAA (New York, NY, U.S.A.)

AbeBooks Seller Since May 29, 1998 Seller Rating

Half-length, seated in semi-profile. 1 vols. 3-1/2 x 2-1/2 inches. "He stands forever on that dusty Montana slope " Superb image of the still-controversial Custer, the boy-general, gallant Union cavalry officer, ambitious, publicity hungry Indian fighter, and in many ways the U.S. soldier who epitomized the posture of the United States in its Westward Expansion until he himself was killed, with his command, at the Battle of the Little Big Horn in 1876. This photograph, taken by the famous Civil War photographer Mathew Brady, is one of the rarer Brady images of the legendary general. "Even now [1984], after a hundred years, his name alone will start an argument. More significant men of his time can be discussed without passion because they are inextricably woven into a tapestry of the past, but this hotspur refuses to die. He stands forever on that dusty Montana slope ." - Evan S. Connell, SON OF THE MORNING STAR. Half-length, seated in semi-profile. 1 vols. 3-1/2 x 2-1/2 inches. Seller Inventory # 232129

Publisher: Printed by Anthony from the negative by Brady, [New York


All items, as usual, are guaranteed as described and are returnable within 30 days. All
books are shipped UPS (please provide a street address) unless otherwise requested.
Overseas orders should specify shipping preference.
All postage is extra.
New clients are requested to send remittance with your orders. Libraries may apply for
deferred billing. All New York and New Jersey residents must add appropriate sales tax.
We accept American Express, Master Card and Visa.
All items are subject to prio...