Items related to You Can't Catch Death: A Daughter's Memoir 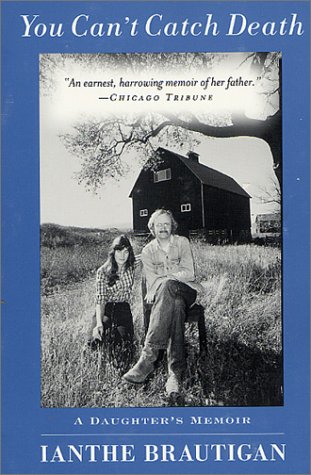 In all of the obituaries and writing about Richard Brautigan that appeared after his suicide, none revealed to Ianthe Brautigan the father she knew. Through it took all of her courage, she delved into her memories, good and bad, to retrieve him, and began to write. You Can't Catch Death is a frank, courageous, heartbreaking reflection on both a remarkable man and the child he left behind.

His daughter was 24 when quintessential '60s author Richard Brautigan (Trout Fishing in America) killed himself in 1984, and the obituaries were almost as painful for her as his tragic act. "I did not recognize the dignified, brilliant, hysterically funny, and sometimes difficult man who was my father in anything they wrote," says Ianthe Brautigan, who makes it her business to capture those qualities in this poignant memoir. Her recollections of an unsettled childhood bouncing between two free-spirited parents' bohemian homes (in San Francisco, Montana, Hawaii, and Japan) are remarkably free from bitterness, even when she chronicles drunken phone calls from her suicidal father. Alcohol was Richard Brautigan's fatal weakness, prompted by severe depressions rooted in an impoverished, unhappy childhood. But Ianthe also depicts his tenderness and warmth, the magical sessions of impromptu storytelling with writer buddies like Tom McGuane and Jim Harrison, the glamour of meeting movie stars Peter Fonda and Margot Kidder. She comes to terms with the past that always haunted her father when she makes a trip to Oregon to see her grandmother, estranged from Richard for 25 years. Without presuming to solve the mystery of his death, the author reclaims the values of Brautigan's life and work in her touching, sensitively written book. --Wendy Smith