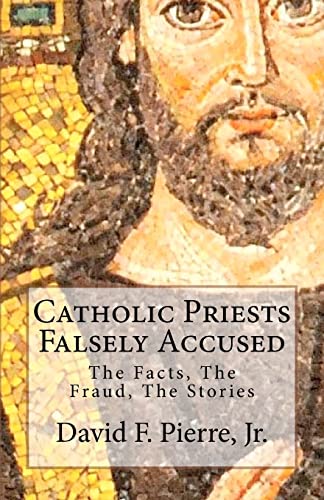 Catholic Priests Falsely Accused, the Facts, the Fraud, the Stories

AbeBooks Seller Since May 29, 1997 Seller Rating

"This is an important topic, and not just for priests and bishops! Everyone should be concerned about this. Please check out Catholic Priests Falsely Accused: The Facts, The Fraud, The Stories." - Rev. John T. Zuhlsdorf ("Fr. Z"), "What Does The Prayer Really Say?", wdtprs.com

"David Pierre's Catholic Priests Falsely Accused is an important volume. By carefully documenting the harrowing stories of priests falsely accused, the author shows that legitimate outrage about abuse can at times boil over into wanton hysteria. May this book serve as a clarion call for even-handed and impartial justice for all, so that future tragedies may be avoided." - Rev. Thomas G. Guarino, S.T.D., Professor of Systematic Theology, Seton Hall University

"Mr. Pierre's book is an eye opener! Meticulously researched and clearly written, it is a must-read for anyone with questions about the sex abuse scandal in the Catholic Church." - Rev. Kenneth Gumbert, O.P., M.F.A., Providence College

We must continue to demand justice and compassion for victims of Catholic clergy abuse. This is not optional.

However, there is a side of the Catholic Church abuse narrative that is not getting the attention it warrants. Countless priests in the United States have been falsely accused of committing horrendous child abuse.

Topics in this book include:
... how the most recent and reliable figures reveal that one third of accused Catholic priests in a major archdiocese were accused falsely;
... the stunning court declaration with the opinion from a retired FBI investigator that "one half" of all accusations are "entirely false" or "greatly exaggerated";
... the American cardinal who has been the target of not just one - but two - completely bogus abuse accusations;
... how accusers have retained huge monetary settlements even though their allegations later proved to be false;
... the father of an accuser who appeared at the funeral of an accused priest and apologized for the false allegation that his son leveled;
... proof that the agenda of the advocacy group SNAP (Survivors Network of those Abused by Priests) has little to do with the protection of children and everything to do with bludgeoning the Catholic Church;
... the Catholic archbishop who tells of being spat upon by a member of SNAP;
... the monsignor who waited five years to be exonerated of abuse charges even though his alleged victims denied having been molested;
plus much more.

This is the side of the Catholic Church abuse narrative that the media has not told you. This book is fast-paced, informative, and impeccably researched. There is no other book like this one.

Dave Pierre is the country’s leading observer of the media’s coverage of the Catholic Church abuse narrative. Reviewers praised his previous book, Double Standard: Abuse Scandals and the Attack on the Catholic Church, as "essential reading," "a landmark book," and "a great service to the Church." Dave is the creator and author of TheMediaReport.com and is a contributing writer to NewsBusters.org, the popular media-bias blog of the Media Research Center.

Dave has been cited in The New York Times, interviewed on National Public Radio (NPR), and noted by many other media outlets for his work. He has also contributed to print publications.

Dave lives with his wife and family in Massachusetts.


INCLUDE THE BOOKSELLER INVENTORY/CATALOG NUMBER OF THE TITLE(S) IN QUESTION IN ANY CORRESPONDENCE.

International customers are responsible for all Duties/Taxes/VATs/etc.

If you wish to insure your order and/or have special shipping instructions, please contact the seller via email for details. We are happy to accom...


For international shipping, there is really only one method now, Air. So we state one price. We shall gladly reduce your shipping charge if the cost is less than our quoted rate; likewise, if your package costs significantly more, we'll request that you pay an additional amount.