Items related to Catholics and Jews in 20Th-Century America 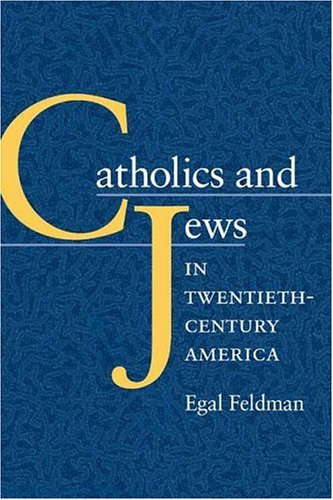 Catholics and Jews in 20Th-Century America

Rich with the insights of prominent Catholic and Jewish commentators and religious leaders, Catholics and Jews in Twentieth-Century America recounts the amazing transformation of a relationship of irreconcilable enmity to one of respectful coexistence and constructive dialogue.

From the Inquisition to the Passion Play at Oberammergau with its demonic Jews gloating over the Crucifixion, the Catholic Church for centuries perpetuated a theology of contempt that reinforced antipathy between the two faiths. Focusing primarily on the Catholic doctrinal view of the Jews and its ramifications, Egal Feldman traces the historical roots of antisemitism, examining tenacious Catholic beliefs such as displacement theology (the idea that the Jews lost their place as the chosen people with the coming of Christianity), deicide, and the conviction that the Jews' purported responsibility for the Crucifixion justified all their subsequent misery and vilification.

A new era of Catholic-Jewish relations opened in 1962 with Vatican II's Nostra Aetate, No. 4. A blueprint for a radical transformation of the Catholic relationship to the Jews, this document brought about a reversal of the theology of contempt, a de-emphasis on converting Jews to Christianity, and a determination to initiate constructive dialogue between Catholics and Jews. Feldman explores the strides made in improving relations, such as the Vatican's diplomatic recognition of the Jewish state. He also discusses recent disputes, including the erection of a convent near Auschwitz and the proposed canonization of the wartime pope, Pius XII, that reflect the fragility of the interfaith relationship.

Thoughtful and thorough, Catholics and Jews in Twentieth-Century America underscores the magnitude of the change in Catholic thinking about Jews since Vatican II and the courage of thinkers and leaders on both sides in forging new bonds across the lines of faith.

"Here [Feldman] takes up the American Jewish-Catholic relationship and its remarkable development over the course of the 20th century. In doing so he has given a precious gift to both communities... I would commend him for his balance and sure-footedness while narrating a number of extremely complex and sensitive issues and incidents... I can highly recommend this book." -- Eugene J. Fisher, Moment "Draws voluminously from books and articles representing wide-ranging views of events and attitudes of the last century... Recommended ... especially for its assemblage of materials on issues long in need of healing." -- Library Journal "Feldman traces the tortuous journey in Catholic thinking from the theology of contempt that held sway through the first half of the 20th century to the era of dialogue that ensued after Vatican II's groundbreaking Declaration on the Jews. More than half the book is devoted to a careful look at Catholic attempts to come to terms with its legacy of antisemitism, its growing awareness of the Holocaust as a fundamental rupture in Christian self-understanding, and the political and theological complexities of Zionism and the state of Israel." -- Choice "In this interesting and timely book Feldman has traced the story of how [anti-semitic] communal attitudes have shifted over the past hundred years." -- Virginia Quarterly Review "A lively, informative and eminently readable account of the sometimes-halting journey away from mutual animus and suspicion, toward popular reconciliation and understanding... An invaluable interpretive and informational source." -- Joshua Zeitz, Association of Contemporary Church Historians Newsletter ADVANCE PRAISE:"In a lucid and comprehensive overview of Catholic/Jewish relations in the twentieth century, Dr. Feldman provides depth of historical perspective and analysis to the major issues affecting relations between two critical American religious minorities. A combination of first-rate scholarship and eminently readable prose." -- Steven Bayme, director of Contemporary Jewish Life, American Jewish Committee