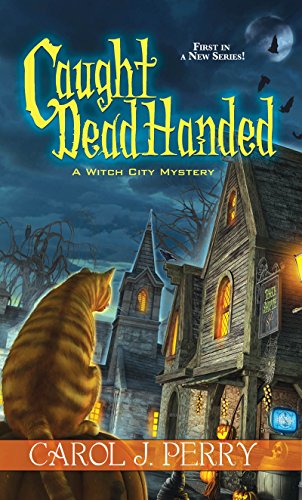 AbeBooks Seller Since May 14, 2015 Seller Rating

She's not a psychic--she just plays one on TV.

Most folks associate the city of Salem, Massachusetts with witches, but for Lee Barrett, it's home. This October she's returned to her hometown--where her beloved Aunt Ibby still lives--to interview for a job as a reporter at WICH-TV. But the only opening is for a call-in psychic to host the late night horror movies. It seems the previous host, Ariel Constellation, never saw her own murder coming.

Lee reluctantly takes the job, but when she starts seeing real events in the obsidian ball she's using as a prop, she wonders if she might really have psychic abilities. To make things even spookier, it's starting to look like Ariel may have been an actual practicing witch--especially when O'Ryan, the cat Lee and Aunt Ibby inherited from her, exhibits some strange powers of his own. With Halloween fast approaching, Lee must focus on unmasking a killer--or her career as a psychic may be very short lived. . .

Carol J. Perry knew as a child that she wanted to be a writer. A voracious reader, whose list for Santa consisted mostly of book titles, she never lost sight of that goal. While living in Florida, Carol was on assignment for Southern Travel Magazine, preparing an article on the world's tallest sand castle which was being built near her home. That combination of events inspired her first young adult novel, Sand Castle Summer. That book was soon followed by half a dozen more. Carol and her husband Dan live in the Tampa Bay area of Florida with two cats and a Black Lab. Visit her at caroljperry.com.

Buying and selling books since 1999.


Orders usually ship within 1 business days. Shipping costs are based on books
weighing 2.2 LB, or 1 KG. If your book order is heavy or oversized, we may contact
you to let you know extra shipping is required.