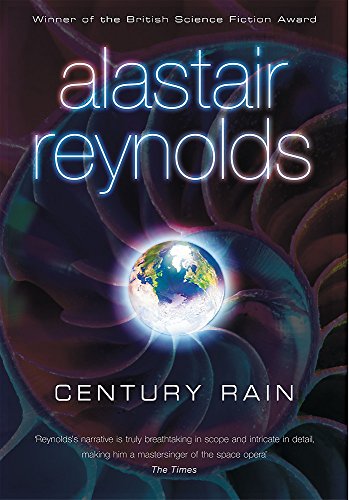 Synopsis: Three hundred years in the future, Verity Auger is a specialist in the archaeological exploration of Earth, rendered uninhabitable after the technological catastrophe known as the Nanocaust. After a field-trip to goes badly wrong, Verity is forced to redeem herself by participating in a dangerous mission, for which her expertise in invaluable. Using a backdoor into an unstable alien transit system, Auger's faction has discovered something astonishing at the far end of a wormhole: mid twentieth-century Earth, preserved like a fly in amber. Is it a window into the past, a simulation, or something else entirely? CENTURY RAIN is not just a time-travel story, nor a tale of alternate history. Part hard SF thriller, part interstellar adventure, part noir romance, CENTURY RAIN is something altogether stranger.

About the Author: Alastair Reynolds was born in Barry, South Wales, in 1966. He studied at Newcastle and St Andrews Universities and has a Ph.D. in astronomy. Since 1991 he has lived in the Netherlands, near Leiden, where he works as an astrophysicist for the European Space Agency.

Book Description Paperback. Condition: Very Good. The book has been read, but is in excellent condition. Pages are intact and not marred by notes or highlighting. The spine remains undamaged. Seller Inventory # GOR001176286

Book Description Gollancz, 2004. Hardcover. Condition: Used; Good. **Simply Brit** Shipped with Premium postal service within 24 hours from the UK with impressive delivery time. We have dispatched from our book depository; items of good condition to over ten million satisfied customers worldwide. We are committed to providing you with reliable and efficient service at all times. Seller Inventory # mon0001711032

Book Description Gollancz, 2004. Hardcover. Condition: Used; Good. **SHIPPED FROM UK** We believe you will be completely satisfied with our quick and reliable service. All orders are dispatched as swiftly as possible! Buy with confidence!. Seller Inventory # mon0001477772

Book Description Gollancz, 2004. Hardcover. Condition: Used; Good. Dispatched, from the UK, within 48 hours of ordering. This book is in good condition but will show signs of previous ownership. Please expect some creasing to the spine and/or minor damage to the cover. Ripped/damaged jacket. The dust jacket of this book is slightly damaged/ripped, however, this does not affect the internal condition. Seller Inventory # CHL5470883

Book Description Orion Pub Co, 2004. Hardcover. Condition: Good. Connecting readers with great books since 1972. Used books may not include companion materials, some shelf wear, may contain highlighting/notes, may not include cdrom or access codes. Customer service is our top priority!. Seller Inventory # S_272451104

Book Description Orion Pub Co, 2004. Condition: Good. A+ Customer service! Satisfaction Guaranteed! Book is in Used-Good condition. Pages and cover are clean and intact. Used items may not include supplementary materials such as CDs or access codes. May show signs of minor shelf wear and contain limited notes and highlighting. Seller Inventory # 0575074361-2-4

Shipping: US$ 24.70
From United Kingdom to U.S.A.
Destination, rates & speeds