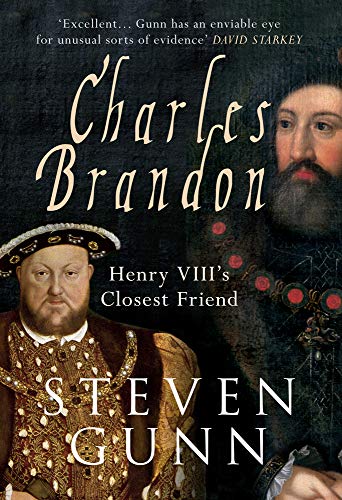 Synopsis: We don’t really consider Henry VIII to have had friends, rather subjects, cronies and dutiful wives and ministers of state. But Henry was a very sociable person and craved genuine relationships. Charles Brandon, the son of Henry VII’s standard-bearer at the Battle of Bosworth, was to be his closest friend and companion for his entire life. They met at his father’s court, where Charles was a dashing jouster, and Charles would hold a succession of important offices in the royal household. Henry VIII trusted Charles with some of the dirtiest jobs at the Tudor court, clearing out Katherine of Aragon’s household and negotiating with Anne of Cleves over her divorce from the king. Henry also forgave him for marrying in secret his favourite sister, Mary, the widowed Queen of France.Yet Brandon’s life was by no means free from misadventure. His marriage to Mary initially angered the king, and his relationship with Anne Boleyn was fraught. Some of his many military campaigns disappointed Henry with their retreats and mutinies and he was suspected of passing secrets to the French. Steven Gunn explains how Brandon not only survived these vicissitudes of fortune and managed to retain the king’s friendship, but steadily increased his own power, wealth and standing. When Charles died in 1545, Henry ordered him laid to rest in St George’s Chapel in Windsor, where Henry had buried his favourite wife, Jane Seymour, and where he would end up himself a mere eighteen months after his one true friend.

About the Author: Dr Steven Gunn is Professor of Early Modern History and Tutor in History at Merton College, Oxford. He has taught Tudor history at Oxford University for over twenty years and is a regular commentator on the subject for BBC Radio and the broadsheet newspapers. His other books include Arthur Tudor: Prince of Wales, Cardinal Wolsey: Church, State and Art and Early Tudor Government.