Items related to Chaucer's Open Books: Resistance to Closure in... 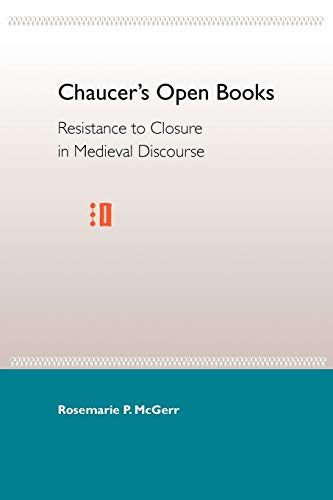 "This is a book that a Chaucer teacher would want to purchase, and that would be recommended for purchase to one's class of graduate or upper undergraduate students. . . . Fully conversant with sophisticated modern theory of open form as well as medieval rhetorical theory and practice; . . . shows Chaucer's living relation to a whole body of writing, medieval and modern; and . . . does so in a manner that is immediately accessible and highly refreshing."--Derek Pearsall, Harvard University

Rosemarie McGerr examines the open-endedness of Chaucer's narrative poems in relation to modern and postmodern theory and to medieval traditions. She discusses links between Chaucer’s poems and modern definitions of "open form" and then addresses medieval conventions of closure and pre-Chaucerian poems that subverted those conventions. Against this critical backdrop, she offers readings of Chaucer's narrative poems focusing on how they manipulate medieval conventions of closure and openness, highlight ambiguity in interpretation of texts, and raise questions about the relationship of gender and reading.
McGerr's study is the first to demonstrate that subversion of closure plays a major role in all of Chaucer's narrative poems and to provide an in-depth analysis of the treatment of closure in medieval poetic theory and practice, with evidence from a wide variety of Latin and vernacular texts. It is also the first book to discuss medieval subversion of closure in relation to modern and postmodern theories of open poetics.
In combining a comprehensive discussion of Chaucer's works and an innovative approach to a major issue in contemporary literary discourse, McGerr argues for a reinterpretation of Chaucer's poems that have long been thought incomplete as examples of "open form."

Rosemarie P. McGerr, associate professor of comparative literature at Indiana University, is the editor of The Pilgrimage of the Soul and author of numerous articles in Exemplaria, Comparative Literature, Viator, and other journals.

Rosemarie P. McGerr, associate professor of comparative literature at Indiana University, is the editor of The Pilgrimage of the Soul and author of numerous articles in Exemplaria, Comparative Literature, Viator, and other journals.