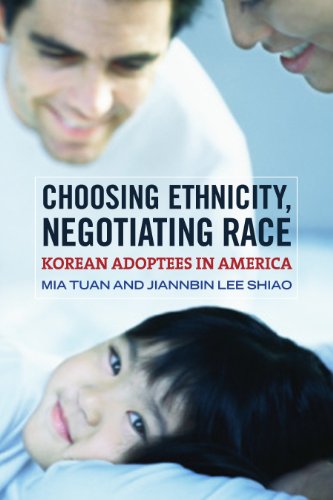 Synopsis: Transnational adoption was once a rarity in the United States, but Americans have been choosing to adopt children from abroad with increasing frequency since the mid-twentieth century. Korean adoptees make up the largest share of international adoptions―25 percent of all children adopted from outside the United States―but they remain understudied among Asian American groups. What kind of identities do adoptees develop as members of American families and in a cultural climate that often views them as foreigners? Choosing Ethnicity, Negotiating Race is the only study of this unique population to collect in-depth interviews with a multigenerational, random sample of adult Korean adoptees. The book examines how Korean adoptees form their social identities and compares them to native-born Asian Americans who are not adopted. How do American stereotypes influence the ways Korean adoptees identify themselves? Does the need to explore a Korean cultural identity―or the absence of this need―shift according to life stage or circumstance? In Choosing Ethnicity, Negotiating Race, sixty-one adult Korean adoptees―representing different genders, social classes, and communities―reflect on early childhood, young adulthood, their current lives, and how they experience others' perceptions of them. The authors find that most adoptees do not identify themselves strongly in ethnic terms, although they will at times identify as Korean or Asian American in order to deflect questions from outsiders about their cultural backgrounds. Indeed, Korean adoptees are far less likely than their non-adopted Asian American peers to explore their ethnic backgrounds by joining ethnic organizations or social networks. Adoptees who do not explore their ethnic identity early in life are less likely ever to do so―citing such causes as general aversion, lack of opportunity, or the personal insignificance of race, ethnicity, and adoption in their lives. Nonetheless, the choice of many adoptees not to identify as Korean or Asian American does not diminish the salience of racial stereotypes in their lives. Korean adoptees must continually navigate society's assumptions about Asian Americans regardless of whether they chose to identify ethnically. Choosing Ethnicity, Negotiating Race is a crucial examination of this little-studied American population and will make informative reading for adoptive families, adoption agencies, and policymakers. The authors demonstrate that while race is a social construct, its influence on daily life is real. This book provides an insightful analysis of how potent this influence can be―for transnational adoptees and all Americans.

Book Description Russell Sage Foundation, 2011. Condition: Good. A+ Customer service! Satisfaction Guaranteed! Book is in Used-Good condition. Pages and cover are clean and intact. Used items may not include supplementary materials such as CDs or access codes. May show signs of minor shelf wear and contain limited notes and highlighting. Seller Inventory # 0871548755-2-4

Book Description Russell Sage Foundation Publications 2011-01-13, 2011. Hardcover. Condition: Good. Item is in good condition. Some moderate creases and wear. This item may not come with CDs or additional parts including access codes for textbooks. Might be an ex-library copy and contain writing/highlighting. Seller Inventory # DS-0871548755-3