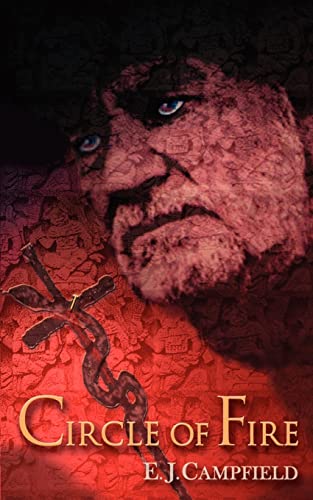 Synopsis: Five Cherokee lie ritually slain in a Carolina cave, scalps shaved and faces tattooed in the style of a long vanished secret medicine society. The tribes say it is the work of a spirit creature they call "Uktena"...the Snake Ghost. Determined to expose the real slayer and stop the butcherous rites, B.I.A. agent Caleb Easton and forensic psychologist Ellen Masterson track a grisly trail. It leads west to sacred burial grounds in Oklahoma and finally to Aztec ruins and outcast Mormon polygamy colonies in the wilderness mountains of Mexico. Like a colorful blanket from the Indian lands where this supernatural thriller is set, CIRCLE OF FIRE weaves Native American mysticism with Mormon folk legend in a quest for a lost sacred treasure and a mythical killer whose crimes span two centuries.

Excerpt. © Reprinted by permission. All rights reserved.: A peculiar atmospheric phenomenon took place in the skies over Hector Falls on the morning Knox Wesley materialized there. On a cool, cloudless and dazzlingly sunbright Friday morning, there were dozens of reports of rolling thunder heard over the entire county, followed by an immense thunder clap and chain lightning -- all coming out of a perfectly clear, blue autumn sky. Clem Mott observed the phenomenon while plowing under a field in his lower sixty acres. He shut down his tractor to better make out the source of the rumbling that emanated apparently from the open sky above him. But the sound seemed to come from every direction at once. And the display of lightning that followed was equally strange, not like any chain lightning Mott could ever recall having seen. He went back to plowing, only to be startled half out of his wits by a tremendous thunder clap and a spike of lightning. He got off the tractor, holding his arthritic hip as he limp-ran to look down a slope where it hit. The air was alive with the bite of ozone and so ionized it sent a chill through him. He expected to see fire and charred ground where the blistering bolt had struck. But instead he found only silence and the brown wrecks of corn stalks weaving in a light breeze. Mott squinted. A figure appeared far off in the field. A shaggy-headed man dressed all in black, walking briskly toward him between the rows. The sun-blanched slope grew unnaturally still and quiet. "Might a weary traveler trouble you for some water?" Mott studied the stranger's pale blue eyes as he approached. They hooked and held him almost hypnotically. "No trouble at all, friend," Mott told him. He limped ahead of the man back to his tractor and poured him a cup of water from a jug. The stranger drank it down. Mott poured him another. "Been walking long?" The man smiled at him. "You might say that." "Where you coming from?" "From back there a ways," the man gestured. He laid a hand meaningfully on Mott's shoulder. "Lord bless you and all your house, brother." Mott stepped back, suddenly clutched his arthritic hip and looked at the stranger in cold astonishment. "Who...who are you, mister?" "Just an old missionary," the man said. A half hour later, Mott came sprinting up to the porch of a farm house shaded by oaks. "Mattie!... Mattie!" he called, winded and wheezing for breath. His wife rushed out, drying her hands on a dish towel. Her jaw dropped at the sight of Mott, prancing about like a happy child on his arthritic leg. "Mattie, I've just met the most amazing man!" *

* What seemed a patch of the forest floor itself came suddenly to life and got up. A man, caked with dried mud, covered in leaves and moss. He wore the headdress of a shaman, his face and chest daubed with colored clays. Shaking a noisemaker, he uttered an incantation. A young white man hand-held a 16mm Bolex movie camera. It whirred steadily, documenting the ritual. A microphone carried sounds to a tape recorder tended by Luis Montero. Luis was tall for a Mexican kid, almost six feet, stalwart and good looking with a heavy mustache. Caleb Easton sat beside Luis, raptly jotting notes on a pad. His dark hair was thick as thatching and grown long, pushed casually back. A sparse beard clung to his face, emblazoned with the same hue-rich clays smudged along the foreheads and cheeks of all the Indian men there. The shaman lifted a big kicking lizard and slid its pale belly down a long knife. The lizard bled and quit kicking. A crude bowl was passed through the hut, each of the men sipping its tinted, liquid contents. They handed it to Luis who drank and passed it to Caleb, who drank and made a face. "Shit, Luis, what is this stuff?" Luis shrugged indifferently. Caleb scooped pulpy nodules and spotted mushrooms from the bowl. "Oh, christ. Mescaline and mushrooms," he breathed. Luis couldn't hear him. "Peyote and psilocybin," Caleb said louder. "We're going to be sick as dogs." Luis grinned at him. "You told me you wanted the whole experience, gringo boy." The shaman moved from man to man, working his magic -- until he came face to face with Caleb. The holy man's dark eyes filled with fear. He froze and went silent. The chanting in the hut ceased. It took plenty to throw a fright into an old conjurer like that. He inched warily away from Caleb. The participants came out of the crude hut and into the night. Caleb and Luis were among the last. The shaman reverently laid a small, hand-woven pouch with a drawstring in Caleb's hand. There was a symbol stained on it and something shapeless inside. He closed Caleb's fingers firmly around it. Caleb was not proficient enough in the language to understand the words the old holy man uttered. "He says a powerful warrior's spirit lives inside you. But Uktena, the Snake Ghost, follows you," an Indian man translated for him. "The medicine bag is to protect you until you are a man," he nodded his painted face for emphasis. "Then, you must face him." The shaman crouched at a distance. He seemed to be watching something beyond Caleb. Something moving. Something no one else could see.