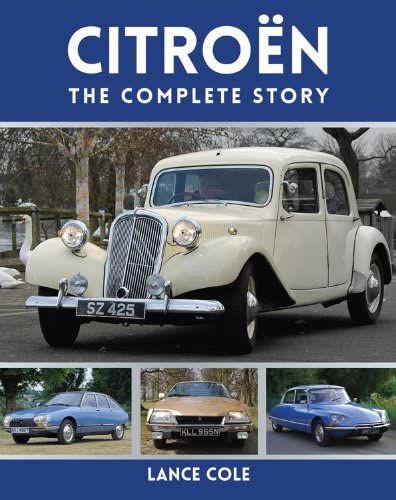 Investigates the details of the cars of Citroen, and the aeronautical and cultural origins that lay behind Citroen's form and function. This book digs deep into the ethos of Automobiles Citroen to create a narrative on one of the greatest car manufacturers in history. Num Pages: 272 pages, 329 colour photographs. BIC Classification: KNDR; WGCB. Category: (G) General (US: Trade). Dimension: 287 x 223 x 23. Weight in Grams: 1330. . 2014. First Edition. Hardcover. . . . . Books ship from the US and Ireland. Bookseller Inventory # V9781847976598

In this new view on the Citroen story, automotive/ aviation writer and design specialist Lance Cole investigates not just the details of the cars of Citroen, but the aeronautical and cultural origins that lay behind Cirtoen's form and function.  The book digs deep into the ethos of Automobiles Citroen to create a narrative on one of the greatest car manufacturers in history.  Using interviews, translations, archive doucments and specially-commissioned photographs, the Citroen journey is cast in a fresh perspective.  It explains in detail the influences upon Citroen design: Voisin, lefebrve, Bertoni, Boulanger, Mages, Opron and recent Citroen designers such as Coco, Blakeslee and Soubirou.  As well as all the men of the great period of 1920s - 1970s expansion, cites less well-known names of Citroen's French engineering, design, and influence such as Cayla, Gerin, Giret, Harmand, Dargeent and others, to give a full picture of Citroen heritage. Provides in-depth analysis of all major Citroen models with an engineering and design focus.Profiles key individuals and cars up to the present day and Citroen's 'DS'-branded resurgence.Features many newly commissioned photographs, rare archive drawings and interviews with Citroen owners.Researched amongst leading Citroen experts and restorers.

Lance Cole is the author of ten books, three of them for Crowood; this is his second book on Saab. He has a global reputation not just as a Saab commentator, but also as a journalist and design writer. Lance won the 1983 Jaguar Cars/Guild of Motoring Writer Sir William Lyons Award and trained at Autocar magazine. Since then he has written for major titles including The Daily Telegraph, The Independent , Aeroplane and Classic Cars. He has become well known as an automotive and aviation correspondent.