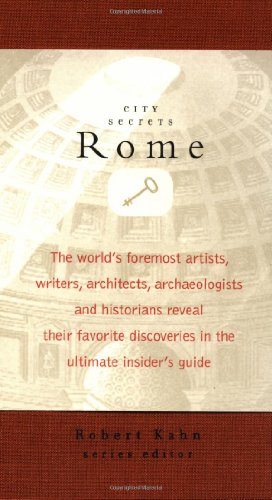 Shows some signs of wear, and may have some markings on the inside. Bookseller Inventory # GRP10805789

Synopsis: This unique compilation of insights into the world's most magnificent art, architecture and antiquities, by the people who know them best, unlocks the door to the Rome most visitors miss.

A renowned painter shows the way to an overlooked masterpiece; an archaeologist walks you through an intriguing ancient ruin; a Renaissance scholar tells which of Michelangelo's works he finds the most moving of all. Along the way a poet laureate imparts the address of a gourmet cheese shop with its own pizzeria and an acclaimed director sets the stage for an ideal Roman afternoon.

City Secrets Rome reveals the city that will take your breath away. Organized by area; with colour maps, vintage photographs and illustrations.

Review: New York architect Robert Kahn knows everybody, so when Gwyneth Paltrow asked him what she should see in Rome (while she was there filming The Talented Mr. Ripley), he collected travel tips from his artist, writer, and historian friends. Realizing that "everybody should have access to these invaluable opinions," Kahn, a onetime resident of the Italian Capitol, decided to publish City Secrets: Rome, a collection of tips, comments, and mini-essays, mainly about art and architecture, whose 200-plus contributors include restaurateur Danny Meyer, painter Frank Stella, architect Michael Graves, and playwright John Guare. His favorite secret? "A Clerical Shopping Spree," by art historian R.J.W. Cro (page 105), which describes the store where Kahn likes to stock up on the distinctive fuchsia sock favored by Catholic cardinals. The elegant, pocket-size book, published by the Little Bookroom, goes on sale in March. Next up? City Secrets: New York. -- New York Magazine

Now when you travel to Rome to marvel at all of the recently restored monuments, artworks and architecture, you can follow the recommendations of some of the world's preeminent artists, historians and architects. City Secrets; Rome (The Little Bookroom) is a new, compact and sophisticated guidebook filled with eloquent musings by people with a passion for the Eternal City - including architect Richard Meier, playwright John Guare and restaurateur Danny Meyer. Whether you visit the Galleria Borghese, the Pantheon, Michelangelo's Piazza del Campidoglio, St. Peter's or the Sistine Chapel, you'll see Rome's glorious sites from very compelling-and different-perspectives. In March 2001, a City Secrets: New York City guide (with opinions from enthusiastic writers) will be available, followed by Paris and London editions. -- Town & Country

When in Rome, do as Danny Meyer, John Guare and Richard Meier do. With the notion that the discerning traveler wants the inside dope, Robert Kahn, a New York architect, canvassed poets, chefs, architects and others for their favorite haunts in "City Secrets Rome" (Little Bookroom). Mr. Meyer, the chef at Union Square Cafe, recommends La Taverna da Giovanni, a family trattoria near the Castel Sant'Angelo; Mr. Guare, the playwright, points the way to a relic, St. Thomas's finger at Santa Croce in Gerusalemme, and Mr. Meier, the architect, is awed by Borromini's all-white star-shaped interiors for Sant'Ivo alla Sapienza. This idiosyncratic guide helps jaded visitors see the Eternal City anew. -- The New York Times

Book Description Condition: Good. 1st. Shows some signs of wear, and may have some markings on the inside. Seller Inventory # 4868591-6

Book Description Condition: Good. 1st. Former Library book. Shows some signs of wear, and may have some markings on the inside. Seller Inventory # GRP68652387

Book Description Condition: Good. 1st. Ships from the UK. Former Library book. Shows some signs of wear, and may have some markings on the inside. Seller Inventory # GRP68652387