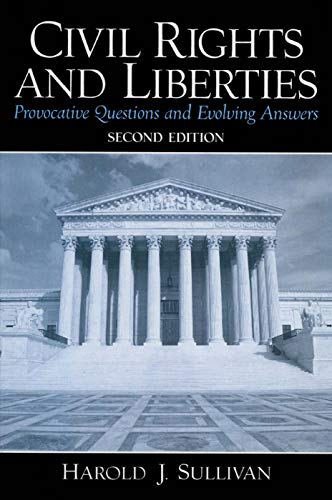 For undergraduate courses in Constitutional Law, Civil Rights & Liberties, Introduction to American Government,Introduction to Law and Legal Process, and Judicial Process & Politics. Examining contemporary and perennial constitutional issues in civil liberties and rights, this text engages students in an exploration of how and why U.S. Supreme Court Justices have interpreted the provisions of the U.S. Constitution relating to freedom of expression and religion, and equal protection and privacy.

Most of us have been exposed at some level to controversies concerning abortion, affirmative action, hate speech, obscenity, and the like. Many are puzzled and/or angered by what they have heard about such issues but have little or no understanding of what such issues are about and how and why the courts have dealt with them. In this book I hope to stimulate readers into thinking critically about such controversial issues in the civil rights/civil liberties field.

In order to stimulate such thinking, each section of this book is introduced with a question. The questions are followed by responses which present the variety of "answers" justices on the Supreme Court have given to such questions in actual cases which have come before the United States Supreme Court. The questions are phrased simply and directly, and each answer is an essay designed to make constitutional interpretation accessible to readers even if they have no background in constitutional law. I expect that when such readers see many of the questions, they will think to themselves: "I've always wondered about that." When they read the "answers," they will be exposed to various constitutional tests and doctrines. I also hope that when they read the questions and the variety of answers to them, they will be stimulated to explore in greater detail the U. S. Supreme Court decisions from which these answers were derived.

The subtitle of this book refers to "provocative questions and evolving answers." The answers provided by the United States Supreme Court justices have in fact been constantly evolving as the Justices have sought to apply the principles of the Constitution to changing circumstances and new questions, some of which could not have been anticipated by the authors of the Constitution.

By discussing both traditional and new issues throughout, in the end I hope to provoke readers into thinking about some questions that may become increasingly important in the future. These are issues with which the U. S. Supreme Court has only begun to grapple. I hope my discussion of them will stimulate readers to help evolve some new solutions on their own. ACKNOWLEDGMENTS

Any author, if he is honest with himself, must acknowledge that his work is largely a product of the inspiration, encouragement, and support of many beyond himself. I know I owe much to my family, many friends, and colleagues. My wife Joan Kross and I have been together less than four years, but as I said in the dedication, she has changed my life in all things for the better. As soon as she learned I was working on this project, she provided an essential push. . . : My mother Margaret Shine Sullivan, the other woman in my life, has from the beginning always believed in me and encouraged me. I thank as well the rest of my family, including especially my late sister Evelyn, who always supported me in everything I did as my brother Kenneth does today. My stepsons John and Edward asked intelligent questions, engaged me in spirited arguments, and provided encouragement (including Edward's insistence that I change the working title of this book). They sometimes seemed puzzled by the flexibility of my academic schedule; I hope my completion of this work will convince them that I do indeed really work for a living! My wife's mother Irene Kross, has also provided encouragement. I cannot acknowledge family support, however, without acknowledging my unofficial family, my closest friend for over 30 years, Stephen Devaux, and his wife Deb. Stephen goaded me almost daily as I completed this work. Most importantly he and Deb introduced me to my wife Joan. But the most unusual gift he could ever have given me is the opportunity to know and love his two awe-inspiring children, A.J. and Eric. Having been allowed to share close up in watching A. J. grow into the impressive young teenager he is now and to see his younger brother Eric blossom into his own has been one of the greatest sources of pleasure I have had.

Colleagues at the City University and other friends over the years have provided ideas and encouragement as this project has gone forward. I think in particular of all of my colleagues in the Government Department at John Jay College, especially Bob Sullivan, Barry Latzer, and Roger McDonald, who provided useful suggestions. Other John Jay colleagues whose friendship and encouragement have been invaluable include Jim Cohen, Anna Goldoff, Karen Kaplowitz, and Basil Wilson. Outside of CUNY, Stephen White, with whom I first discussed the idea for this project two decades ago; Inez Smith Reid, who first introduced me to Constitutional law; Glenn Tinder whose book Political Thinking gave me the idea for the question and answer format of this book; and my mentor and friend from college, George Goodwin, Jr., deserve acknowledgment and thanks as do Beth Gillett Mejia, Jayme Heffler, and the editorial staff and the Prentice Hall reviewers: Richard Hardy, University of Missouri, Columbia; and Gregory M. Scott, University of Central Oklahoma.

Finally, I acknowledge two very different contributors to all of my work, my close friends over three decades in "the Group" and my students at John Jay College. I have maintained very strong friendships over three decades with a collection of University of Massachusetts at Boston classmates, known collectively as "the Group"; they, together with their spouses, friends, and significant others, as well as other friends in Boston and New York have helped make life fun as well as intellectually stimulating. With a little help from the U.S. Supreme Court (see p. 65), Grendel's Den in Harvard Square has often served as our preferred rendezvous for nearly two decades. I have had the privilege of teaching a wonderfully diverse array of students, many of whom have struggled against incredible odds to succeed. Many of them have done as well as the best anywhere. So I close thanking them for providing inspiration to all of their professors.