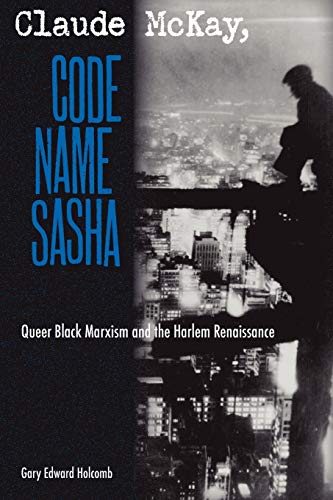 "An original book on a neglected figure of the Harlem Renaissance . . . Holcomb is the first scholar to offer a coherent account of the different aspects of McKay's career and life without treating them as contradictions."--John Carlos Rowe, University of Southern California

"This project of intellectual, cultural, aesthetic history is a major undertaking . . . sure to become an indispensable point of reference for students and scholars in American, African American, Caribbean, diaspora, colonial and postcolonial studies, race, and gender studies."--Sandra Pouchet Paquet, University of Miami

"Sasha" was the code name adopted by Harlem Renaissance writer Claude McKay (1889-1948) to foil investigations of his life and work. Over a period of two decades, the FBI, U.S. State Department, British police and intelligence, and French law enforcement and colonial authorities took turns harassing McKay, an openly gay, Marxist, Jamaican expatriate who had left the United States and was living in Europe. In this study of four of McKay's texts--the first literary, cultural, and historical analysis to address the multilayered "queer black anarchism" in McKay's writings--Holcomb argues that McKay's "fringe" perspective not only targeted him for investigation but also contributed to a declining literary reputation. Perceived as mystifying and unacceptable because of his dedication to communism, McKay is perplexing and difficult to classify within the traditional constructs of the Harlem Renaissance. The problem that McKay's transnational, aesthetically itinerant writing inevitably has posed is where to locate him.

In recent years, access into McKay's work has been transformed by new methods of interpreting the politics of literary texts, the growing significance of transnationality in literary and cultural analysis, and the impact of "queer theory." Holcomb analyzes three of the most important works in McKay's career--the Jazz Age bestseller Home to Harlem, the négritude manifesto Banjo, and the unpublished Romance in Marseille. Holcomb uncovers ways in which Home to Harlem assembles a homefront queer black anarchism, and treats Banjo as a novel that portrays Marxist internationalist sexual dissidence. Among the most notable contributions to black modernist study, Holcomb's scholarship is the first to assess the consequence of McKay's landmark Romance in Marseille, a text that is, despite its absence from broad public access for nearly 80 years, conceivably the most significant early black diaspora text. Finally, he examines McKay's extensive FBI file and his late-1930s autobiography, A Long Way from Home, in which McKay disguises his past as a means of eluding his harassers. The memoir is essential to understanding McKay's first three novels. Relying on queer theory and related language-oriented approaches, moreover, this study emphasizes that the key to McKay's queer black Marxism lies as much in confronting his textual absence as it does in rereading the author historically.

Gary Edward Holcomb is associate professor of African American literature in the Americas at Ohio University.