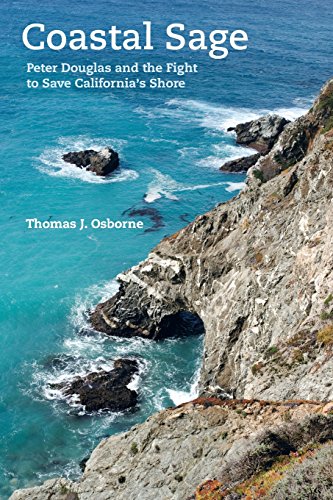 Coastal Sage: Peter Douglas and the Fight to Save California's Shore

Synopsis: There are moments when we forget how fortunate we are to have the California coast. The state is home to 1,100 miles of uninterrupted coastline defined by long stretches of beach and jagged rocky cliffs. Coastal Sage chronicles the career and accomplishments of Peter Douglas, the longest-serving executive director of the California Coastal Commission. For nearly three decades, Douglas fought to keep the California coast public, prevent overdevelopment, and safeguard habitat. In doing so, Douglas emerged as a leading figure in the contemporary American environmental movement and influenced public conservation efforts across the country. He coauthored California’s foundational laws pertaining to shoreline management and conservation: Proposition 20 and the California Coastal Act. Many of the political battles to save the coast from overdevelopment and secure public access are revealed for the first time in this study of the leader who was at once a visionary, warrior, and coastal sage.

From the Inside Flap: “With unusual insight and an engaging writing style, Tom Osborne reveals the backstory of coastal protection in California. The central character in this drama is Peter Douglas. Outrageous, colorful, stubborn, passionate, and infinitely creative, Douglas is a leading candidate for environmental sainthood.”—Mary Shallenberger, Past Chair, California Coastal Commission

"Osborne reveals a critical chapter in California’s history by chronicling the heroic career of Peter Douglas, whose leadership of the California Coastal Commission made it the most effective coastal management agency in the world. Douglas may have done more to define what California is today than anyone else. Osborne, an activist who loves the coast, writes with passionate prose that is backed by academic rigor."—Chad Nelsen, CEO of Surfrider Foundation

“Coastal Sage is a keen appraisal of the California Coastal Commission’s legendary first director, Peter Douglas. Its timing is perfect. If the current administration accelerates offshore oil production, the beaches Douglas preserved will be despoiled. In these contentious times, Coastal Sage reads like an activist’s primer.”—Char Miller, author of Not So Golden State: Sustainability vs. the California Dream

“This is a remarkably important study of California’s coastal region as well as a portrait of the sage who led the effort to conserve its beauty and resources. Deeply steeped in historical research, Coastal Sage should inform all future debates about California’s coastline.”—David Igler, author of The Great Ocean: Pacific Worlds from Captain Cook to the Gold Rush

Book Description University of California Press, 2017. Paperback. Condition: Good. Item may show signs of shelf wear. Pages may include limited notes and highlighting. May include supplemental or companion materials if applicable. Access codes may or may not work. Connecting readers since 1972. Customer service is our top priority. Seller Inventory # mon0001504274

2. Coastal Sage : Peter Douglas and the Fight to Save California's Shore

Book Description University of California Press. Paperback. Condition: Good. A copy that has been read, but remains in clean condition. All pages are intact, and the cover is intact. The spine may show signs of wear. Pages can include limited notes and highlighting, and the copy can include previous owner inscriptions. At ThriftBooks, our motto is: Read More, Spend Less. Seller Inventory # G0520296656I3N00

Book Description University of California Press, 2017. Paperback. Condition: VERY GOOD. Pages are intact and are not marred by notes or highlighting, but may contain a neat previous owner name. The spine remains undamaged. Supplemental materials are not guaranteed with any used book purchases. Seller Inventory # 0520296656_abe_vg

5. Coastal Sage: Peter Douglas and the Fight to Save California's Shore

Book Description University of California Press, 2018. Paperback. Condition: Near Fine. 2018 edition!!! Book has a touch of wear to the edges and corners, otherwise in near fine condition. Seller Inventory # 948303

6. Coastal Sage and#8211; Peter Douglas and the Fight to Save California`s Shore

8. Coastal Sage and#8211; Peter Douglas and the Fight to Save California`s Shore

9. Coastal Sage - Peter Douglas And The Fight To Save California`s Shore

10. Coastal Sage - Peter Douglas And The Fight To Save California`s Shore