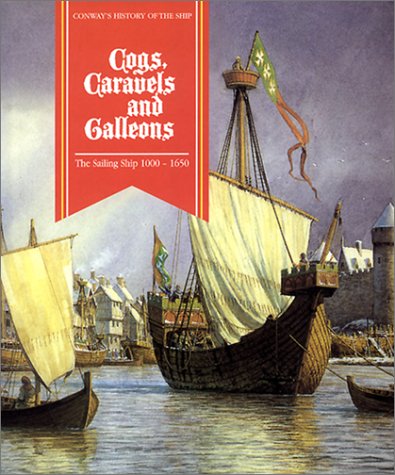 COGS, CARAVELS AND GALLEONS traces the development of seagoing vessels from the traditions of late antiquity to the all-important emergence of the three-masted ship, undoubtedly the most significant innovation in the history of shipping before the steam engine. Without the three-masted ship the European age of exploration and expansion is almost inconceivable and there is no doubt that the subsequent evolution of the world would have been markedly different.
In recent years much original research has been done in this field, based on both documentary sources and archeology, but this is the first overall synthesis of the new material now available. The main chapters are devoted to the principal ship types, explaining the latest thinking on the characteristics of cogs, caravels, and hulks that have caused scholarly debate for decades.
There are also more general sections on essential background subjects like construction and guns and gunnery, as well as pertinent essays on the evidence -- from documentary sources, contemporary illustrations and archeology. All the contributors are foremost experts in their fields, but in presenting the fruits of their research at an approachable level, COGS, CARAVELS AND GALLEONS is a pioneering work in this area of maritime history.
Lavishly illustrated, this informative volume - the eighth in an ambitious series - includes over 50 black-and-white photos, 145 illustrations, and five tables.

CONWAY'S HISTORY OF THE SHIP

The ship is probably the most influential tool in human history and it continues to exert a widespread and persistent fascination. CONWAY'S HISTORY OF THE SHIP is the first comprehensive and authoritative account of this technological and cultural phenomenon.
An unprecedented line-up of over one hundred leading maritime historians and specialists from around the world has been assembled to ensure that the work is informative, authoritative and fully international in outlook.
Every significant ship type from the dawn of seafaring to the present day is analyzed and detailed in coherent essays. Each volume adopts a strong theme which allows it to stand alone, but throughout the series a strict chronological sequence has been maintained.