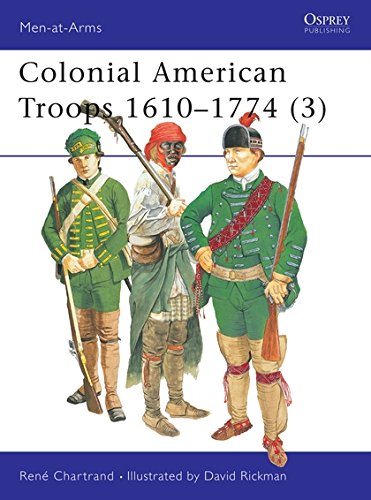 Synopsis: From the earliest English settlements the survival of the infant colonies in North America depended upon local militias. Before the mid-18th century royal troops were seldom shipped out from Britain, and the main burden of successive wars with the American Indians, and with Britain's colonial rivals France and Spain, fell upon locally raised units, which also fought alongside the Crown forces during the major operations of the French-Indian War of the 1750s. This final book of a fascinating three-part study covers the militias and provincial troops raised in the Carolinas, Pennsylvania, Delaware, Georgia, Nova Scotia, Hudson's Bay and Quebec Province; and also Rangers, and colors and standards.

From the Publisher: Packed with specially commissioned artwork, maps and diagrams, the Men-at-Arms series is an unrivalled illustrated reference on the history, organisation, uniforms and equipment of the world's military forces, past and present.

Book Description Osprey Publishing, 2003. Paperback. Condition: Good. Connecting readers with great books since 1972. Used books may not include companion materials, some shelf wear, may contain highlighting/notes, may not include cdrom or access codes. Customer service is our top priority!. Seller Inventory # S_271192035

Book Description Osprey, 2003. Paperback. Condition: GOOD. Has little wear to the cover and pages. Contains some markings such as highlighting and writing. Seller Inventory # 1841764833_abe_gd