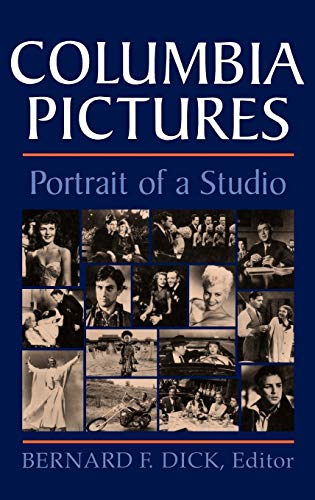 Columbia Pictures: Portrait of a Studio

Synopsis: The recent $3.4 billion purchase of Columbia Pictures by Sony Corporation focused attention on a studio that had survived one of Hollywood's worst scandals under David Begelman, as well as ownership by Coca-Cola and David Puttnam's misguided attempt to bring back the studio's glory days. Columbia Pictures traces Columbia's history from its beginnings as the CBC Film Sales Company (nicknamed "Corned Beef and Cabbage") through the regimes of Harry Cohn and his successors, and concludes with a vivid portrait of today's corporate Hollywood, with its investment bankers, entertainment lawyers, agents, and financiers.

Bernard F. Dick's highly readable studio chronicle is followed by thirteen original essays by leading film scholars, writing about the stars, films, genres, writers, producers, and directors responsible for Columbia's emergence from Poverty Row status to world class. This is the first attempt to integrate film history with film criticism of a single studio. Both the historical introduction and the essays draw on previously untapped archival material―budgets that kept Columbia in the black during the 1930s and 1940s, letters that reveal the rapport between Depression audiences and director Frank Capra, and an interview with Oscar-winning screenwriter Daniel Taradash.

The book also offers new perspectives on the careers of Rita Hayworth and Judy Holliday, a discussion of Columbia's unique brands of screwball comedy and film noir, and analyses of such classics as The Awful Truth, Born Yesterday, From Here to Eternity, On the Waterfront, Anatomy of a Murder, Easy Rider, Taxi Driver, The Big Chill, Lawrence of Arabia, and The Last Emperor. Amply illustrated with film stills and photos of stars and studio heads, Columbia Pictures includes a brief chronology and a complete 1920-1991 filmography. Designed for both the film lover and the film scholar, the book is ideal for film history courses.

About the Author: Bernard F. Dick, professor of communications and English at Fairleigh Dickinson University, is the author of numerous books on film history, including Engulfed: the Death of Paramount Pictures and the Birth of Corporate Hollywood and Hal Wallis: Producer to the Stars.

1. Columbia Pictures : Portrait of a Studio

Book Description University Press of Kentucky. Hardcover. Condition: Good. A copy that has been read, but remains in clean condition. All pages are intact, and the cover is intact. The spine may show signs of wear. Pages can include limited notes and highlighting, and the copy can include previous owner inscriptions. An ex-library book and may have standard library stamps and/or stickers. At ThriftBooks, our motto is: Read More, Spend Less. Seller Inventory # G0813117690I3N10

2. Columbia Pictures : portrait of a studio

4. COLUMBIA PICTURES: Portrait of a Studio

5. Columbia Pictures: Portrait of a Studio

Book Description University Press of Kentucky, 1991. Condition: Good. A+ Customer service! Satisfaction Guaranteed! Book is in Used-Good condition. Pages and cover are clean and intact. Used items may not include supplementary materials such as CDs or access codes. May show signs of minor shelf wear and contain limited notes and highlighting. Seller Inventory # 0813117690-2-4

6. Columbia Pictures: Portrait of a Studio

Book Description Brand: The University Press of Kentucky, 1991. Hardcover. Condition: GOOD. Has little wear to the cover and pages. Contains some markings such as highlighting and writing. Supplemental materials are not guaranteed with any used book purchases. Seller Inventory # 0813117690_abe_gd

7. Columbia Pictures: Portrait of a Studio

Book Description Brand: The University Press of Kentucky, 1991. Hardcover. Condition: VERY GOOD. Pages are intact and are not marred by notes or highlighting, but may contain a neat previous owner name. The spine remains undamaged. Supplemental materials are not guaranteed with any used book purchases. Seller Inventory # 0813117690_abe_vg

8. Columbia Pictures: Portrait of a Studio

9. Columbia Pictures: Portrait of a Studio

10. Columbia Pictures: Portrait of a Studio